Share All sharing options for: Bruins Survive An (Expected) Scare In Eugene

As I mentioned this am I don't know what it is about Oregon and the Mac Court but somehow Bruins always manage to get themselves into a tense situation in that place.

Ben Ball warriors survive a MAJOR scare against Ernie Kent's Ducks, but thanks to JS's clutch shots (and best game of the season) manage to pull out a nail biting win to pull out a road sweep in Oregon: 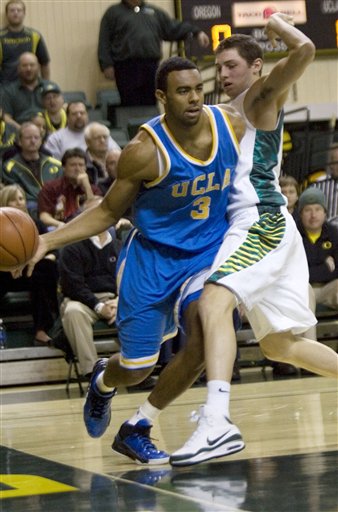 Bruins once again came out strong and took 40-29 lead at the half time. Bruins were clicking from the outside early on as 7 different Ben Ball warriors connected from the 3 point line early on. However, it was the Ducks who looked like[Note by Telemachus, 01/04/09 3:28 PM PST ] Ben Ball warriors after the half time with inspired effort around the boards and showing a little more hustle and intensity in the second half.

Thanks to JS's one clutch shot after another Bruins finally took control of the game very late in the second half and cemented it with DC's clutch shooting from the FT line. DC replicated last year's effort in Eugene with 22 pts and 9 assists. JS finished with 17 pts going 5 for 6 from the 3 pt line. AA2 despite being plagued by foul trouble (due to some horrible officiating by the typical SPTRs) finished with 12 pts and 4 boards. Our seniors came through in a big way down the stretch.

Otherwise, Bruins will have lot of issues to work on heading into their next game against Southern Cal. They will need to figure out how to get their intensity around the boards and work on tightening up their defense which was leaky both around the perimeter and the interior.

Anyway all in all still a clutch win for a team featuring so many freshmen. Bruins run up their record to 12-2 and 2-0 in the conference. I will take it and open up the post game thread for all your takes.

Josh Shipp makes 5 of 6 3-pointers over the Oregon Ducks.