Bumped. Time to revisit our post from January given the recent events from last few days re. Erin Andrews. GO BRUINS. -N 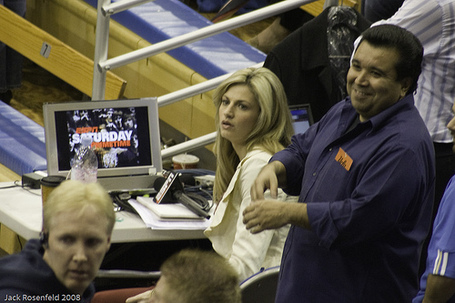 UPDATE II (N): Unless you live in a cave with no contact with sports world you probably know about the Erin Andrews saga. If you didn't you can get caught up over at SportsMediaWatch and read Will Leitch's perspective at Deadspin. Meanwhile, we are going to bump this post up because well it's a little relevant now. I wonder if people still think Ray Ray's little stunt on Erin Andrews was just good fun. The full post from January is available after the jump.

UPDATE (N): The video is still up:

In case anyone missed the Ray Maualuga and Erin Andrews video has now been pulled off YouTube. I wonder why.

What is interesting to me is the reaction of Trojans in response to the video. Here is how Adam Rose (a USC alum who comically blogs on "What's Bruin" and "All Things Trojan") initially posted this reaction to Maualuga's approaching of Andrews and doing that dance:

And when you're Rey Maualuga, you don't need to ask for a dance -- you just boogie.

This video may be the underground highlight of the 2009 Rose Bowl game.

Adam thought it was kind of funny. When he got called out on it this is how he backpedaled this way:

This wasn't rape, and I'm not even sure it was a simulated sex act. In 2009, that's more of a silly dance move (especially with his hands making circles in the air). 50 years ago, it would be totally inappropriate under any circumstance. Of course, they said the same thing about Elvis. Today, the connotation isn't quite the same. To some, he may as well have done bunny ears in a still photo. Perhaps it's a generational thing, but I think most people under 30 were amused.

And dismissed it as Maulauga being "silly":

I'm not inclined to give anybody a pass because they're a good player. I might be inclined to give Maualuga the benefit of the doubt on some of his jokes because he's self-deprecating. Ever see the pics of him wearing a pink thong over his workout clothes? It's one thing if you take yourself too seriously, but he always seemed like a silly kid. That's why I'm not jumping to conclusions.

Nothing wrong with a football player - who is the face of a football program - walking around in a pink thong I guess. Adam didn't jump to conclusions except for the fact that he thought it was kind of kewl and funny.

Adam also threw up this:

I'm NOT saying what Maualuga did was appropriate. Because it's on a national stage with cameras all around, he should have been on better behavior.

In other words this would have been totally appropriate if there were no cameras around? Seriously?

So my question is specifically for all the women who are members of BN, read this blog or lurk around here who saw the video before it got pulled down.

Do you agree with Adam or others who thought it was just Ray being "silly"?  Really interested in hearing your takes. Thanks.