You guys couldn't make the time to show up for "Senior Day" in what was one of UCLA's most important regular season game in years. You are too busy with classes and protests (you know things that we apparently didn't have to worry much about while we attended UCLA).

And now it looks like you guys can't be bothered to protect the Bruin Bear on campus: 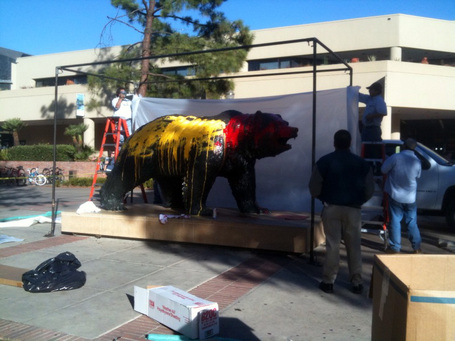 Simple questions:  Really students? How the heck did this happen? Were there any students protecting the Bear? If they weren't, why not? Let me guess. Same lame excuses will be served up that we had to read on Sunday. Just pathetic.

It's a classic silly prank. I can't really get mad at the Trojans for doing this to the Bear. It's part of the rivalry week. We have done the same to them over the years. Unlike the lifeless UCLA students though, the Trojans were ready and prepared all week: 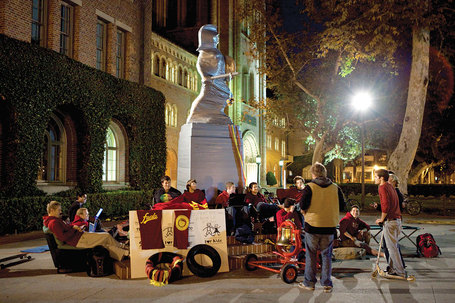 Per the Daily Trojan, "The Trojan Knights will hold a Thanksgiving dinner in front of Tommy Trojan on Thursday as they guard the statue as part of Save Tommy Week." You can make fun of them all you want UCLA students but you got PWNed.

It was up to our students to make sure it didn't happen and protect the obvious target. Looks like they dropped the ball again.

Hopefully our football team will show more heart, passion and desire than the UCLA student body has shown the entire season. There is one word to describe the kind of passion UCLA students have shown this year: Dorrellian.

UPDATE (N): As freesia39 points out apparently there is a Bruin Bear "Security Force" who are charged with this responsibility. You can demand an explanation for WTH happened by either calling them at (714) 487-8353 or emailing them at usarep3@asucla.ucla.edu. Every student groups on campus dropped the ball here. They should be ashamed and apologetic to rest of Bruin Nation. Inexcusable. GO BRUINS.

UPDATE II (N): Per UCLA newsroom the damage was extensive:

"This probably ranks as one of the more egregious forms of vandalism of the bear that we've seen," said Leroy Sisneros, director of maintenance and alterations for UCLA Facilities Management, who recalled that the statue was last vandalized three years ago, when it was defaced with white paint, but not during UCLA–USC rivalry week.   "It took all day to clean in 2006. This is going to take a lot longer," Sisneros said. "It's going to be very expensive. In the past, vandals used water-based paint that can be washed off. But this time, they used an oil-based paint that will be more difficult to remove."

Oh and take note students. The "Bruin" is a gift from the Alumni Association:

In 1984, "The Bruin," a gift from the UCLA Alumni Association, was unveiled before a crowd of nearly 1,000 alumni celebrating the association's first half-century. Measuring 10 feet long, 6 feet wide, 3 feet across and weighing more than 2 tons, the statue was billed at that time as the largest bear sculpture in the United States.

Again, this week has already turned into the worst "Beat $C" week in years thanks to the laziness and apathy of UCLA students. If these students had any sense of pride they would try to fire back by showing up in thousands next weekend at the Mosoleum. Given their Dorrellian performance in recent weeks, it's clear we can't really cound on them. Not this year. GO BRUINS.

UPDATE III (N): Unbelievably this article is currently posted on the Daily Bruin (and I am assuming ran in the print section today):

Students at UCLA and USC also have a long-standing tradition of attempting to vandalize the statues of one another’s mascots, Tommy Trojan and the Bruin Bear. One way in which UCLA has attempted to redirect some of this student enthusiasm is through the Bruin Bear Security Force.

Students who join the security force spend the night camping out in front of the Bruin Bear statue and are provided with entertainment and spirit activities and snacks by various campus organizations, including USAC and SAA.

“The Bruin Bear Security Force is really an opportunity to allow students to get involved in this friendly school rivalry in a safe way,” said General Representative Thach Nguyen. His office is helping organize this year’s security force, who will be treated to a carnival-themed event that includes root beer pong tournaments, blue and gold tie-dying, and performances by a number of student dance and a cappella groups.

I don't really know what commentary I can add to that. Cappella group to get fired up for a football game? Who are the guys organizing this and do they have any clue about college football? GO BRUINS.