So what are we going to do about it? 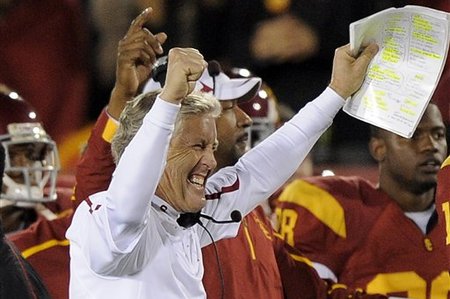 Many Bruin fans, myself included, went to bed last night with our blood pressure a little higher, our heart rates a little faster, and our jaws and fists clenched a little tighter. A few vulgar outbursts under our breaths. Anger, fury, and frustration firmly entrenched in our minds.

Did we learn anything about Pete Carroll and Southern Cal that we didn't know already? No. They are classless. They are arrogant. They are hypocrites. They are low-lifes. Tell me something I didn't know, say, 20 years ago.

My hatred for Southern Cal cannot get any stronger. I loathe them more than a loathe anything on this planet. Yet I am certain there are many Bruins out there that don't have as strong a hatred as I do. If I am on that campus right now, no Trojan gets within 100 yards of the Bruin bear during game week without getting knocked out. Plain and simple. Maybe after last night, there are a few more Bruins on campus that now feel the way I do.

A few more players with an extra spark.

It starts with the next game. Hopefully a bowl game. We need to come out with a fire and passion that will carry a wave of momentum into the offseason.

It carries on into the living rooms of recruits in the offseason. Games are won and lost right here. This fire and passion has to be felt, and hearts and minds have to be won.

It then carries on through the winter and spring quarters in the wee hours in the weight room. It carries on to spring scrimmages and seven on seven drills in the early summer.

It then carries into the start of the 2010 schedule.

I have been watching Bruin-Trojan games since the late '70s. It was the same way then as it is now: the calls will NEVER, EVER, EVER go our way. Period. Which means we have to be THAT MUCH better than they are. We have to go out and ANNIHILATE them. EVISCERATE them. KNOCK THEM OUT. LEAVE NO DOUBT.

One year from now we will have another opportunity. We have to harness that anger, that frustration, and that fury and focus on becoming a better football team.

They are who we thought they were. They always will be. Now we have to get better. Now we have to rise up as a Bruin community and support this program like never before.