I will try to make this my last post on the topic before finally pivoting on to other issues around the football. A number of BNers have done some great research in last 24 hours exposing Cheatey Petey's track record of being a petty, showboating, classless toolbag. bruin7982 brought up (via the google) about an incident Pom Pom had as the Jet's head coach, taunting a Miami Dolphins kicker (yes you read that right, Cheatey was taunting a kicker) back in 1992. Here was the AP story around it: 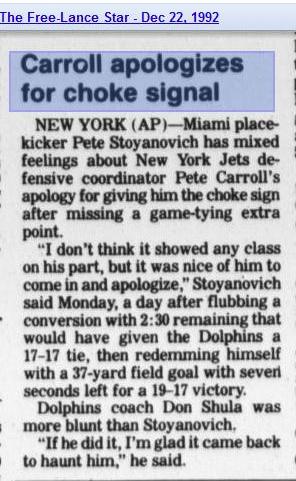 Of course karma bit him in the rear end immediately in that game as the Dolphins ended up winning that game thanks to a clutch FG by that kicker Pete Stoyanovich with 7 seconds left in the game. Again, thanks to bruin7982 for the find. Of course Petey's rapsheet go way beyond that incident. That classless incident only foreshadows how Petey was going to conduct himself like a "classless egomaniac" at the college level (showing no respect for the game).

We had LVBruin looking up all the times Petey decided to run up the scores as the head thug at South Central. Again these are just the key highlights from LV's post (with his commentary):

Again, you can get the full run down here. Of course nothing wrong with "competing" till the final whistle. The information above perhaps wouldn't be germane, if not for the whining we have heard from Petey after the Stanford game. He is now trying to deny he never whined about what "Jimmy" did (that's how Petey addresses Harbaugh), even though the "what's your deal" is memorialized forever thanks to video on the internets.

No wonder Cheatey's spin this time around is even too much for T.J. Slimers (even though some of his colleagues from the Trojan Times predictably fell for it right after the game). The record Petey has built going back to his failed career in the NFL and the checkered one in college (built on pile on scandals) points to a nothing more than a petty sleazebag who never cared about respecting the game.