brtishbruin and KSBruin were already on it last night. We have more major post-season awards news to share about few Bruins from the football team. Kai won the Lou Groza award last night beating out a two great kickers from amazing SEC programsn (Alabama’s Leigh Tiffin and Geogia's Blair Walsh). In addition to Kai accepting his award on ESPN, two more Bruins - Brian Price and Rahim Moore were named in the Second Team All America by the prestigious Walter Camp Foundation: 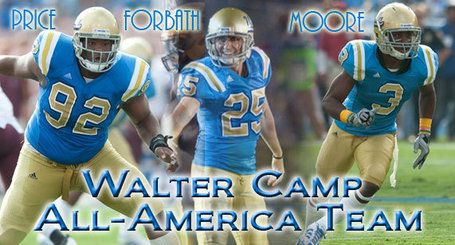 So, let's start with Kai Forbath. Here is the official release which identfied Kai as perhaps the best kicker ever to come out of UCLA:

Dating back to last year, Forbath has converted 39 of his last 42 field goals and had a string of 16 straight successes snapped at Arizona when he missed from 52 yards. He has connected on his last 35 straight field goal attempts inside 50 yards (his last such miss came on a 47-yard attempt in game six last season at Oregon).

His school-record nine field goals of 50 yards or longer rank No. 1 among active FBS kickers. His 70 field goals rank second (tied) among all active players (the next junior is 20 field goals behind him) and his career percentage of .864 is No. 2 among players with at least 40 attempts.

Kai of course deserves this award. It also shouldn't be a surprise to anyone here when Kai puts his name in during the NFL draft's "testing out the water" process to see where he might fall. Although, there is a decent chance of him returning (unlike Brian Price).

I think I appreciated Kai more this season when I was watching other college footbal teams, seeing teams flail away with poor kicking and getting hancuffed during crunch time. That said, I wish Kai would come back for one more season, so that he would get to play for an offense, in which he would play an invaluable role by connecting on long game winning or game tying FGs, instead of drive settling ones he was booming in over and over again during last few years at UCLA. More on last night awards after the jump.

As mentioned in the beginning, in addition to Kai, two other Bruins - Price and Moore - were named in the Walter Camp's All America team:

Moore, a true sophomore, leads the nation with nine interceptions, averaging 0.75 per game. He also ranks fourth (tied) nationally, in passes defensed (1.33 per game). He tied the UCLA single-game record with three interceptions against San Diego State and also made two each versus Tennessee and Arizona. Moore has made 45 tackles on the year, including three for loss.

That was from the official site which also provided the data point re. only Alabama (six) and Florida (four) having more selections than UCLA's three (Texas also had three). That led the LAT to take the cheap shot about those three teams finishing with a combined record of 38-1 (in comparison to UCLA's 6-6).

Of course, anyone with a basic understanding of the personnel of UCLA football program (based on recruiting and talent flow from last 6 years) wouldn't make the basic argument about UCLA having the same talent as those three programs. But hey given what we have seen over the years, often basic coverage of UCLA football is too much to ask for from the Trojan lapdogs in charge of LAT's sports section.  Whatever. The basic lesson is look everywhere else before looking to LAT for information on UCLA sports.

Congrats to all of our guys. Let's hope we get to see these guys at least one more time this season. GO NAVY.