Bumped. This is an uncomfortable question but we can't be afraid to discuss it. The "over the wall" episode puts Neuheisel's ability to lead our program in question. For better or worse Neuheisel did come into Westwood with a reputation of having mentally soft teams. The way the latest incident transpired doesn't make it look good. Neuheisel is doing everything he can to generate excitement around our program and he has injected incredible amount of energy in recruiting. However, if the Bruins choke against Temple on December 29th due to mental mistakes (we have seen this season), the over wall incident will turn out to be a huge strike against CRN, just like the Wyoming became one for Karl Dorrell. GO BRUINS. - N 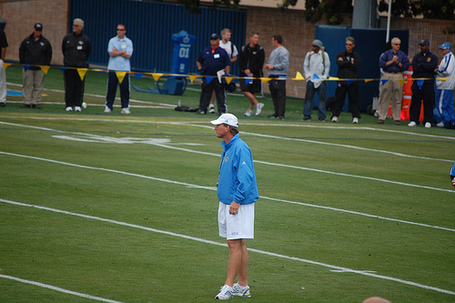 The prank of going over the wall and CRN's response to it may be symptomatic of a larger problem.

The coach sets the tone, the attitude, the standards, the mindset.  It sounds like he's set a soft tone with this little prank.  This is IIRC one of the complaints against him at his former college coaching gigs.

One might argue this is just one minor incident or that such pranks and foolishness are sometimes appropriate, understandable comic relief for team members blowing off steam.

But it does make one wonder.  Can you imagine Coach JW or Red Sanders or Tommy Prothro or CBH allowing an entire team to miss an entire practice?  And then saying it was okay?  Maybe they did and I just don't know.  I sincerely doubt it.

Is this why we have so many d**n penalties?  Is this why some players had a deer in the headlights look for the SUC game?  Is CRN developing warriors or something less?  What's your opinion out there?  Food for thought.