Shifting attention back to football, I want to pick up our discussion from the team's performance in the last game. We talked about offense earlier in the week, let's focus a little on our defense. I went ahead and looked up the numbers of our defense from 2009 season and compared it numbers from 2008 when Dewayne Walker was in charge. Here is how they shape up: 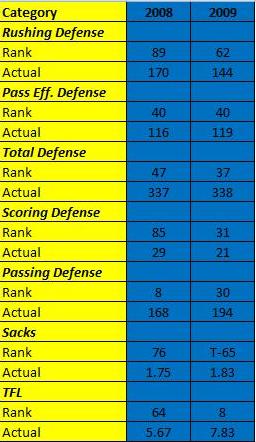 When you look at those numbers keep few factors in mind:

Still looking at those numbers, it appears Chuck Bullough despite all the criticisms (and I believe many of them are on point) did a servicable job of replacing Dewayne Walker. He can actually make credible arguments that his defense actually performed better under him this year than it did under Walker the previous year. Given those numbers, I would have to think he will come back for next season, when he will truly have to prove his coaching mettle without veterans such as ATV, Price, Jerzy, and Reggie Carter. That said, despite the solid performance against Southern Cal, I have some lingering concerns about our defense. More after the jump.

The performance against Southern Cal to me was essentially a replay of the performance against Oregon State. Remember we actually played pretty solid defense against an explosive Beavers offense up in Corvallis. Except for the TD we gave up in Wild-Beaver formation (which I don't understand why we weren't prepared for), our D had the Rodgers brothers bottled up for most of the day. It just all fell apart in that last drive. Yes, if ATV had executed that pick-6, the season would turn out to be even better. However, what happened to our defense after that dropped interception is disconcerting to me.

Same thing happened to our defense during that last TD drive (of course I am not referring to the cheap shot) Trojans put together a 9 play drive, when they sliced and diced right through our secondary in 4:11 long minutes, marching 73 yards for the game clinching TD. What was the common theme here which we saw in the Oregon State (and few other games this season)? It was the cushion our DBs were giving to opponent WRs. Matt Barkley had no problem completing those short, medium range passes, carving up our secondary. It's the same thing Sean Canfield did to our guys in that last drive. We saw in horror Kevin Riley beating ATV number of times at the Rose Bowl, when he was giving up 8-9 yard cushion to Cal receivers.

I didn't get what Bullough was thinking in all those instances. Particularly against the Trojans and Beavers, when our defense had solid outing through most of the game, bringing in pressure from different directions, and generally stuffing the run. I didn't understand the urge to play vanilla, conservative defensive schemes with games on the line, going away from strategy that had been working all day. I am assuming that's a question Bullough and our coaches including CRN have been reflecting on during these past few days.

Watching our defense this season, I also got the sense that Bullough's scheme as heavily crticized as they were by us and others throughout the season, could turn out to be more effective if he gets few more explosive athletes in his disposal in next couple of years, and get the current corp of underclassmen to physically develop in next two years. Sheldon Price had a rough first year (although he showed some signs of improvement). He needs to get stronger so he can provide better run support. Hopefully we will get a healthy year out of Aaron Hester next season. I think our secondary under Moore and Dye's leadership is going to be all right.

The real question right now is at our front-7. Coaches are going to count on Datone Jones to anchor a line that will deeply miss the presence of Price and Jerzy. Joining Jones will be David Carter, Luta Tepa, and Keenan Graham. Those who have been going to practices this year are very high on Graham. Coaches are also hitting the recruiting trail hard to pick up few more DLs as observers are speculating Bruins can bring in as many as 8 DLs in this LBs. As for LB, anxious to see what kids like Isiah Bowens and Todd Golper can bring to the table next year. In terms of experience, I think it will be players like Westgate and Sloane joining Ayers in the front-7, but no doubt the recruits from this past two years are going to get their shots.

My main wish next year though is for Bullough to grow some more confidence so that he has the courage to try out different things in different games. I was encoraged towards the end of the season when the tried different looks with Akeem Ayers in Washington and Arizona State games, discovering how effective he can be as a hybrid DE/LB. He needs to experiment like that a little more, doing his best to make sure we get the best possible combination of force/athleticism on the field.

Anyway, we will have more to discuss on this topic in both short and long term here on BN after we figure out our bowl prospects. If we have a bowl game that will give us an opportunity to discuss it in the context of preparation for next opponent. If not then focus will shift towards recruiting. I really hope we get to see these guys one more time on the field this year though. I get the sense that our defense is itching to get out there for one more game this season to close it out on even better note.