An Evening To Remember: For Bruins In DC

Share All sharing options for: An Evening To Remember: For Bruins In DC

Well where do I start? I am still too spent and tired to coherently lay out all my thoughts and reflections from a memorable 48 hours in DC.  The euphoria included not only seeing my Bruins in person for the for the first time in 8 years (my last Bruin football game in person was the debacle in Stanford in 2001) but also catching up with number of friends I haven't seen in a while and also meeting some of the community members here on BN.

Many of you have already done pretty good analysis and look back into this game. I will try to add some more to it in the coming days. Hey football season is over, so we have a while to unpack all the tidbits from it as we get in the full swing of recruiting season. For now though I want to share some pictures from last night that I think will give you all a little sense of the emotions of a great night for Bruins in a cold, frigid, but all so joyful DC night: 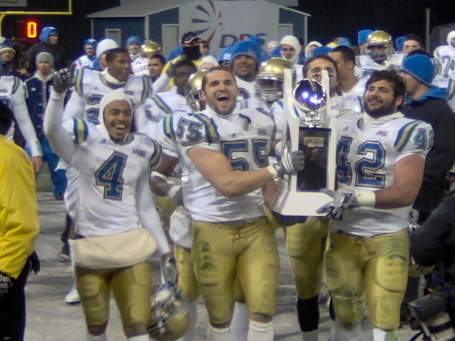 Uh yeah. You can sense the emotions in their faces. Can't you?

I have some more. And before I get to it my apologies to Telemachus, insominiacslounge, E. Corpuz, J. Rosenfeld and many other Bruin photographers who have shared their pictures and shots here on BN over the years. I will never be in their league. My pictures below are basically a hurried attempt to capture the moments as best as I could. 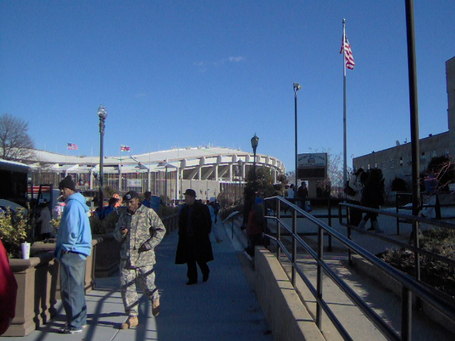 Apparently I got there around the same time Dan Guerrerro arrived as as well. Yeah, that's him in the black overcoat and hat above and below: 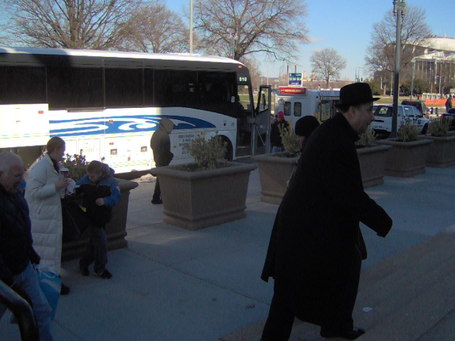 Dan was making his way into the DC armory (right next to RFK) where all the pre-gate tailgate was taking place: 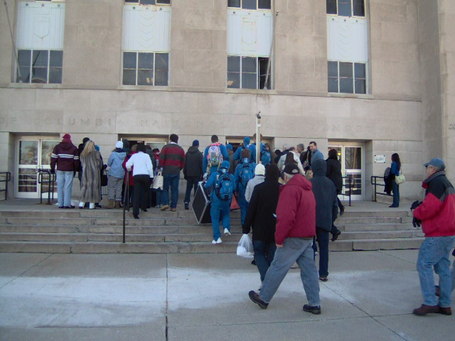 I went in there eventually. But before I did that I had to pick up our tickets at the WillCall and also take in sights and sounds of the frigid atmosphere around the stadium. Bruin fans were finding a way to deal with the cold: 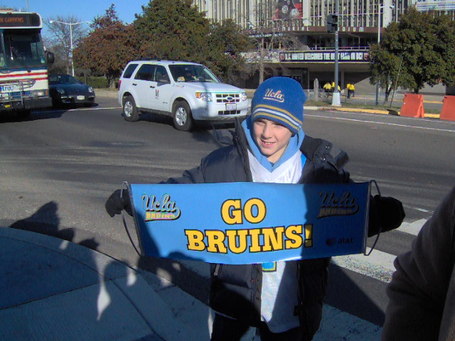 As for the Temple fans, they were enthusiastic (to say the least). They had the entire band behind them (marching into the DC armory): 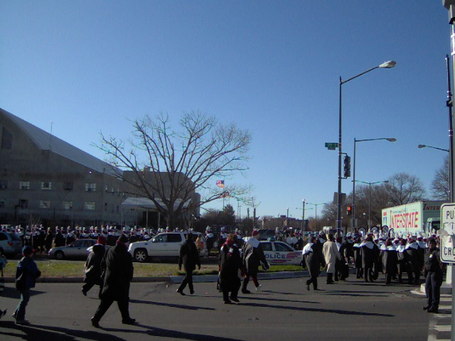 I really wish our guys were matching in playing "Sons Of Westwood." Oh well. As for their mascot, which is apparently a Owl named "Hooters": 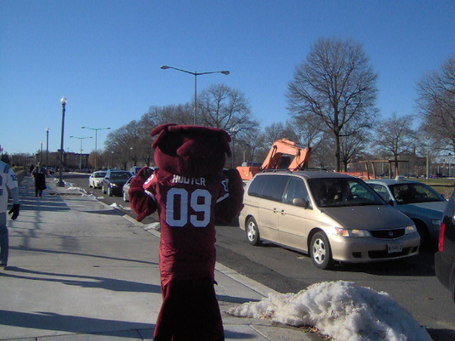 Okay. Whatever. I did wish good luck to him and then went looking for my friend at the Bruin Bash: 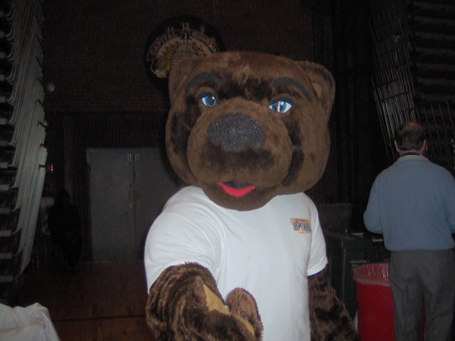 Yeah, I found him along with many other Bruins: 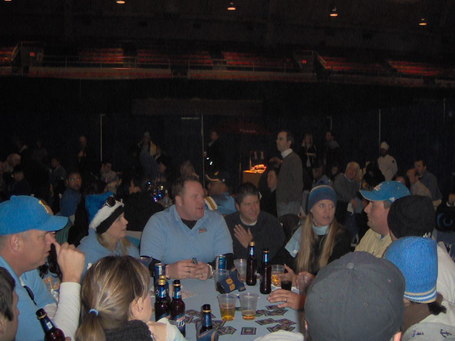 If I have it right the big dude in the middle was none other than former Bruin guard Andy Meyers from Cade McNown glory years. He along with two other former Bruins (I believe they were part of that OL, who anchored our 20 game winning streak) were sitting basically three rows behind us during the game. Their "color" commentary throughout the first half was cracking us up (to say the least) ... and was reflective some way of the game thread here on BN (LOL).

Anyway, I was impressed to see those guys along with former Bruin DE standout Dave Ball. Lot of former players roaming around the Bruin Bash. Then I was pleasantly surprised when I ran into this guy: 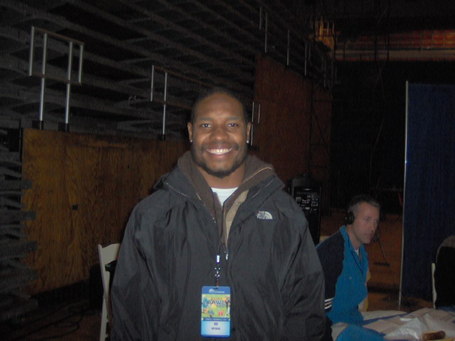 I asked him if I could take a picture of him to share with rest of you. He was more than happy to obliged and told me to say hello to all of you. BTW right behind MJD that's Wayne Cook.  I had a great chat with him during the Bash. We had a laugh about him not spiking the ball against Wisconsin before he went off to his radio show.

Anyway, after chowing down some good grub (feasted on sausage with peppers, pulled pork barbecue, jambalaya, roast-beef and washed it down with few cold beers) we headed off to RFK. Our seats were pretty solid: 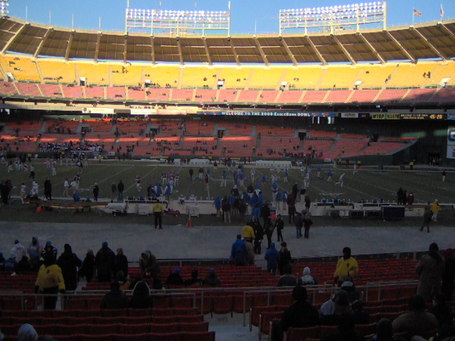 It was just awesome to see this pre-game scene in person again: 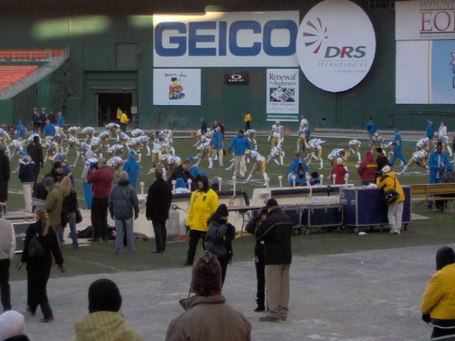 Guess for those of us who haven't been to a game in years and see these guys in person, it's a different feeling when we get to see the football team all together, in person, representing the colors and four letters.

We then walked around the stadium and went all the way up to upperdeck behind the goaline to get some really good view: 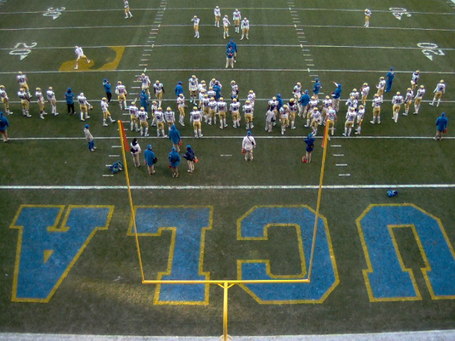 Thought you'd might enjoy that. Here is another look: 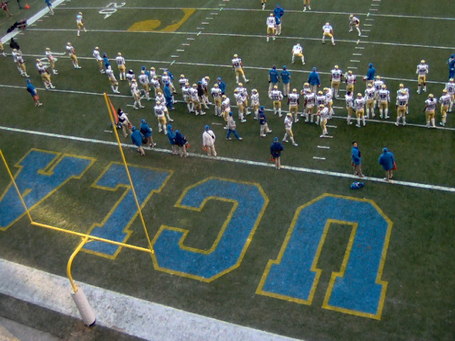 We stayed at that spot for a while which allowed us to check out some of the pre-game first team drill under the watchful eyes of Norm Chow: 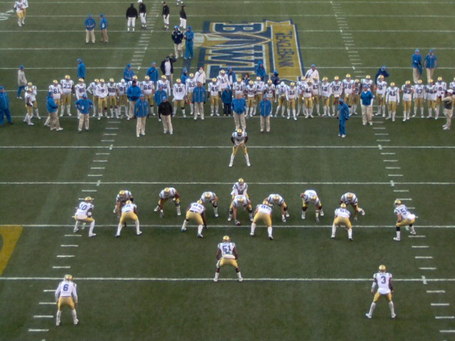 Eventually the team gathered in the center field to get all fired up: 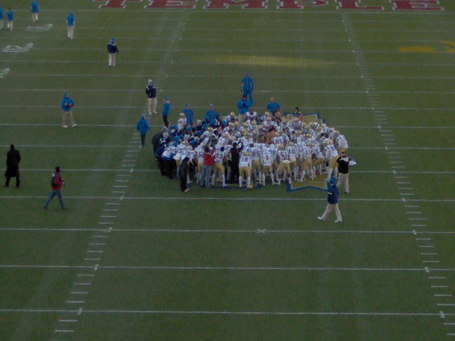 I don't know who the kid was. But the dude in the middle took his shirt off (in 14 degree windchill !!!!) to get the team fired up. Well I guess they didn't get all warmed up until the last 50 seconds of first half.

It was really cold during the game. I wanted focus completely on the game and do as much as I could to stay warmed up (which was jumping around and screaming my head off while we were on defense). By second half beer wasn't doing the trick so lot of folks were drinking these to keep themselves warm: 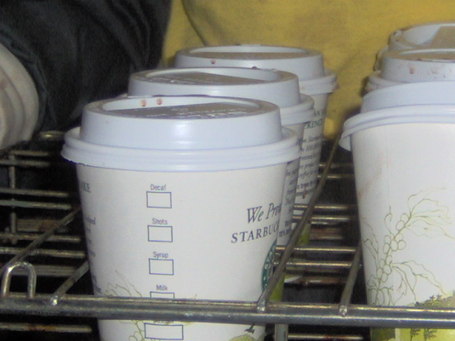 Anyway, we all felt pretty warm after the game was over. This made us FEEL WARM VERY FAST: 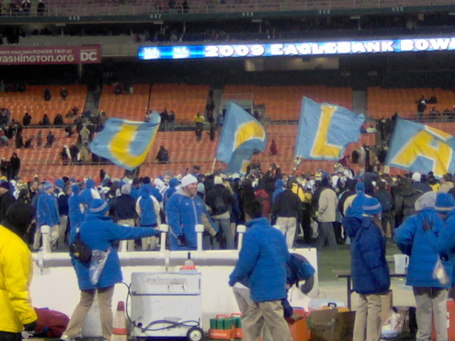 The team came over to us: 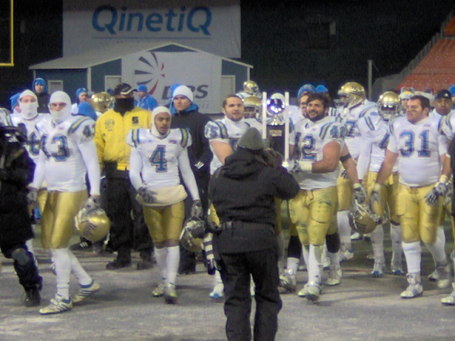 ATV and Austin were feeling pretty happy. The seniors were pretty emotional: 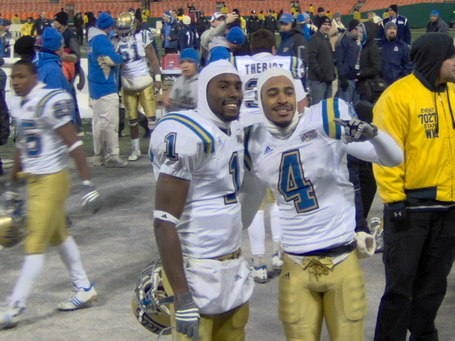 Reggie Carter came over to thank all of us: 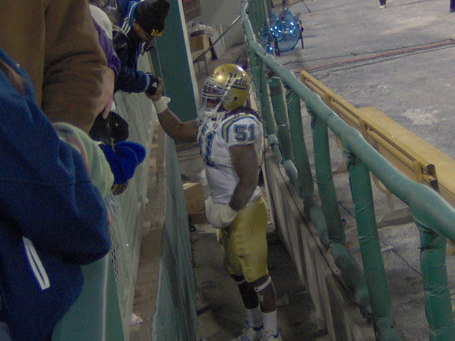 Brian Price, we petty much knew was saying his goodbyes: 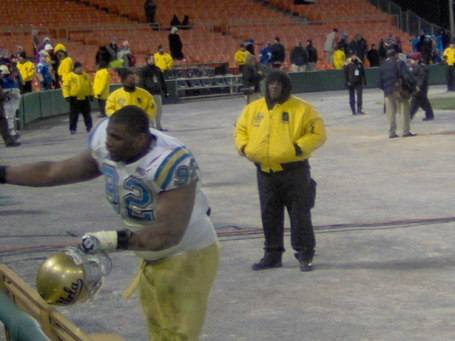 ATV gave me a GO BRUINS: 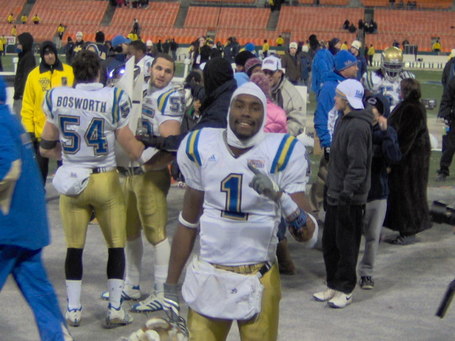 CRN fired up an eight clap: 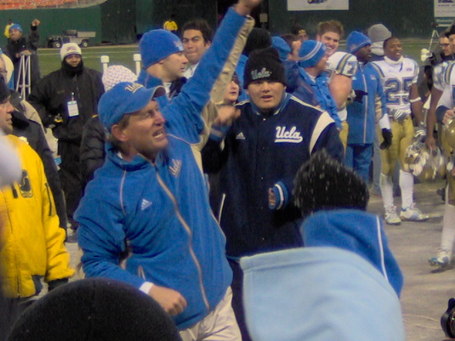 There were so many more moments I could have captured. I think the most important take away from these images is this: if you love UCLA and UCLA football, you should take up any opportunity you can find to travel with the team on road. The bonding experience you build up with other Bruin fans, players, and the team is something I can't really put in words.

The walkback to the Metro experience was amazing. So many stranger Bruin fans were coming up and giving hugs and high fives.

Yes, all of us were incredibly frustrated in the first half.I was not happy with our first half defense as it felt like Stanford game all over again during which Bulloug wasn't making any kind of adjustments. We didn't see any blitzes and we saw the D giving up short completions on swing passes underneath all through the first two quarters. On offense it looked like Prince was struggling to get in rhythm and at one point we were wondering whether his shoulder was healthy. I will be honest, I was hoping for Craft after the pick.

And the Temple faithful were kind of piling on that first half misery. The goofy dance the Temple team was doing to whoop it up (I don't think they were doing it taunt us, I think it's a ritual of theirs or something) was kind of silly and as mentioned in another thread their fans were talking a lot of smack sounding extremely confident before the game and all through the first half.

Still what was extremely encouraging to me was how our guys fought back. They clearly cared and responded to their coaches. It says a lot about Neuheisel's leadership about how the team fought back and effectively dominated (defensively) in the second half. Yes, I understand Pierce got hurt but so was our quarterback going into that game. We responded to the adverse situations. In the old days we would have folded and gotten blown out. The way we came back means something in terms of the current regime.

I can't be more excited about where we are right now. Price's departure shouldn't have been unexpected (unless you were delusional). XSF's decision is not a surprise either but we will get him back. The coaches will go out there and bring in some more talent on defense this year and hopefully we will have guys who will be ready to step up next season.  I feel good about our chances to take another step forward (a winning record in the Pac-10 conference) next season and keep moving this program in the right direction. I don't this will be the last time we will see our guys smiling to end the season: 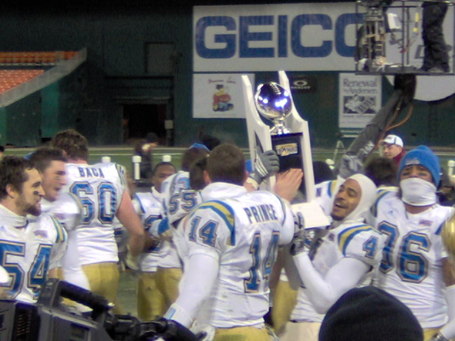