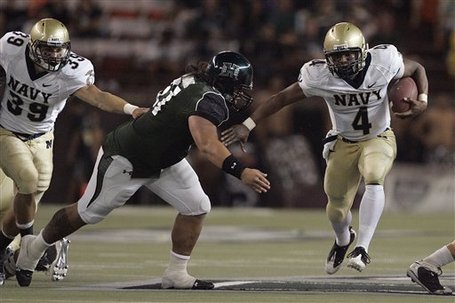 Although it had been reported earlier this week that the Notre Dame players voted to not to go a bowl game, there were conflicting published reports that there had been no vote.  John Walters on NCAA's fanshouse posted on December 3, 2009 that it is highly unlikely that ND would accept a bid, for various reasons outlined in the story. [See also report in the Chicago Tribune, "Notre Dame unlikely to go to any bowl"]

Why does this affect UCLA's bowl prospects?  Because, after you take the 7-5 teams and place them in bowls ahead of eligible 6-6 teams (which is required), the only two BCS league 6-6 teams without bowl tie ins are UCLA and Notre Dame.  There is only one slot for such a team.  The general consensus is that one of the lesser bowls, i.e., Humanitarian, New Mexico, GMAC, Little Casaers, or EagleBank would take a 6-6 BCS team before another 6-6 bowl eligible team.

So, the Notre Dame development, if it plays out, will help UCLA.  At appears that more things must still happen though. Find out what after the jump.

(1) Wisconsin must beat Hawaii this weekend.  Otherwise, Hawaii would be 7-6 and, I believe, must be selected ahead of UCLA for the final slot even though one of their wins came against a FCS school.

(2) Navy must beat Army on December 12.  A 6-6 Army team is guaranteed a bowl berth in the EagleBank bowl, which would fill the final slot.  Even if Notre Dame chooses not to accept a bowl, I cannot foresee a situation (although I have been wrong before :) ) where UCLA knows about it's bowl prospects until AFTER the Army Navy game is played, which may affect whether UCLA can even hold additional practices until it knows whether it is bowl bound.

The outcomes of the Texas  v. Nebraska game and the Boise State v. New Mexico State games could also affect UCLA's chances if the favorites lose, which, in the former case, would elevate Nebraska to a BCS game and, in the latter case, would knock Boise State out of a BCS game, either of which may have a trickle down effect on bowl selections (although a slot would not be filled because in neither scenario would a new bowl eligible team be created since Nebraska is already bowl eligible and NMSt. is not going bowling).

The good news is that both Wisconsin and Navy are heavy favorites (as are Texas and Boise State).  Pull for these teams in the next two weeks if you are a Bruin!!