Our team showed effort and desire against number 1 ranked. As for our students? As Ryan noted in the post game thread:

The most disappointing part of the day was the students not showing up. The courtside Den brought it, but the upper level students never filled more than 3 of their sections. They started letting other people sit in a couple of the students’ sections because they all knew that the sections wouldn’t be filled by students. It’s okay though. Those buses make it tough for the students to get there.

Here is the picture: 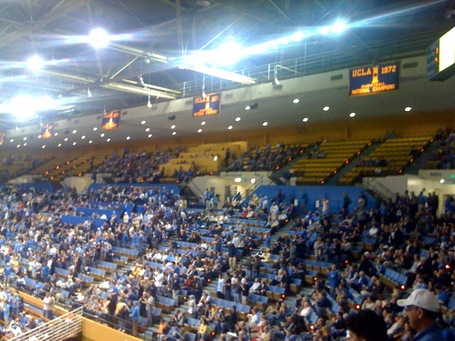 Ryan further noted re. the picture:

That picture was taken about 2 minutes before tip. The rest of the arena filled up pretty well. There were some empty seats scattered about, but for the most part, it was full. The student section? Nope. Not only was it empty, but the students in the upper level were never standing, were barely cheering and some had their feet up in the seat in front of them. Except for a game or two a year though, that’s been the norm recently.

What will be the excuses this time:

What are the excuses for this? Discuss.