UCLA's Price Is Right For The Pac-10: Brian Headlines 11 Bruins Honored As All Pac-10

Share All sharing options for: UCLA's Price Is Right For The Pac-10: Brian Headlines 11 Bruins Honored As All Pac-10

hicalliber is already on it but this deserves lot more attention. This is not a surprise but still worthy of a huge celebration on Bruin Nation. Here is our Pac-10 Defensive Player: 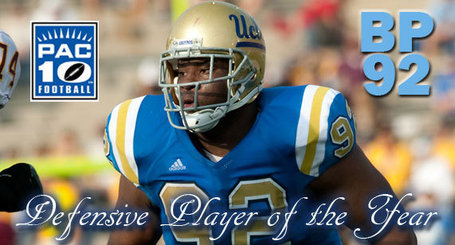 The official announcement came out earlier this afternoon which included lot of good news for the football team. Not only Brian Price was named Pac-10's Defense POY, he was part of a group of 11 Bruins named in the All Pac-10 team. Five of them were first-team selection:

UCLA junior defensive tackle Brian Price has been named Pac-10 Pat Tillman Defensive Player of the Year by vote of the league's coaches, it was announced today.

A total of 11 Bruins were named to the All-Pac-10 teams. Joining Price on the first team were senior linebacker Reggie Carter, sophomore safety Rahim Moore, senior cornerback Alterraun Verner and junior place kicker Kai Forbath. Forbath and Price were two of the three unanimous selections to the first team.

UCLA had more first-team defensive selections (four) than any other school in the conference.

You can read more from the official press release here.

Congrats to Brian, Reggie, ATV, Austin, and Bosworth. That's a wonderful way for them to leave Westwood after what they have given us last 3-4 years. We will have to wait to see what happens with Kai, as he might be testing the waters during the off season. Meanwhile, can't wait to see how Rahim, Akeem, Nelson, XSF, and Locke build on the success from this season.

For now though let's hope the Midshipmen comes though on Saturday so that we get to see these guys for one more time to close out the year. Go Navy. Oh and don't forget to congratulate our boys in this celebratory thread.