Share All sharing options for: Steve Lavin: The Blagojevich Of College Hoops

Bumped. Shame on the UCLA Athletics Club of Orange County for allowing this con artist who flushed our prorgam into the gutter, to appear at a Bruin basketball related function. Please email Michael Rorabaugh, the contact for this event at mrorabaugh@athletics.ucla.edu to let him know how you feel about this coaching fraud who for seven years destroyed UCLA basketball talking about Coach John Wooden's program. Note please be courteous and professional to Michael while voicing your disapproval.

You are looking at him, the Blagojevich of colleage basketball: 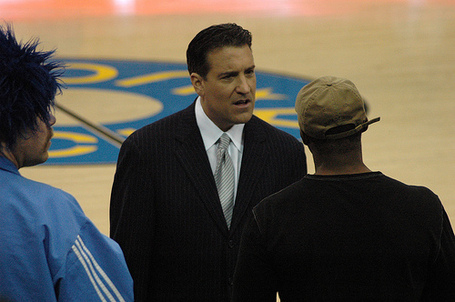 Steve Lavin is not a Bruin.

He will never be part of the UCLA lore (nowithstanding his job of getting cup of coffee for Jim Harrick's basketball staff and posing as a "head coach" during the seven darkest years in college basketball).

What Steve Lavin really is: he is nothing short of a con artist who made millions by posing as a "basketball coach" at the expense of UCLA's incompetent chancellor (incompetent when it comes to understanding the role UCLA athletics play in the greater Bruin Nation) Al Carnesale and a clueless AD in Pete Dalis. And if anyone needs proof they just need to look up the comments from Baron Davis on this worthless poser of a "coach."

There is really need to visit the details of all the record setting humiliating losses and utter failure to develop blue chip recruiting talents he brought in during his firs two years in Westwood by taking advantage of the core talents of Toby Bailey, J.R. Henderson, Kris Johnson, Charles O'Bannon and Cameron Dollar, recruits brought in by Coach Jim Harrick.

Still if anyone needs a quick reminder of Blago's this con artist's forgettable 12 years at UCLA here is islandbruin in the post-game thread.

Not only was Lavin inane, but it really is annoying that they have now rewritten history to talk about Lavin’s 12 years at UCLA. Give me a break. What they did not point out was that Coach Howland, who they rightly extolled, lost 28 games in the first 2 seasons with the threadbare cupboard that Lavin left, before he was able to re-establish UCLA’s identity as a national power. How this guy gets a microphone is beyond me.

Class of 66 also provided the following takes on how the con artist still has no idea what he is watching on the basketball court:

Like the morons, the lizard just doesn’t get why we are so strong and why we win. If they would read along here they’d know about our offensive efficiency rating. And, they’d know that when we play our lock down D, we really are unbeatable — because our D keys our O. I can understand the lizard overlooking this — after all, he really couldn’t tell the difference between when we were being manned or zoned.

And, I cannot tell you how tired I am of hearing how intolerant we are of not winning championships.

We are so far from that. We are realistic and part of that realism is that we know when our coaches suck, are not developing our talent and are throwing away our future; when that happens, we are intolerant.

Yes, I know, I should have turned the lizard off — it grates at me that he is the "expert" commentator. But, in a way it is funny to see the lengths he will go to aggrandize his terrible term in Westwood. I agree with the posters — when they rolled out the 12 year thing, and showed all the pictures of him with Harrick and tried to create the impression that he was an integral part of the banner year — I just laughed because it was so pathetic.

Well I guess the only people he is fooling are the corporate overlords on WWL who are foolish enough to pay this tragicomic blowhard to "analyze" basketball games (I wonder if he has figured out the difference between a zone and man-to-man defense).

Whatever he says the reality is we do know him pretty well in Westwood. We know him well enough to know that he is nothing but a cheap con artist (just like Blago) who ripped of UCLA posing as "leader" of our basketball team.

We just don't get why Dan Guerrerro, Coach Howland and their staff allow this con artist to return to Pauley. He will never be part of us or part of Wooden's program which thankfully as been restored under the Caretaker of Westwood.