Dealing With The Ebb & Flow: Bruins Lose A Tough Game

Share All sharing options for: Dealing With The Ebb & Flow: Bruins Lose A Tough Game

Hopefully we will never have to hear from all UCLA haters and whiners about how Bruins get all the call (like we had to deal with last year) after tonight.

As expected Bruins had a battle in their hands when they took on the Sun Devils tonight at ASU. ASU threw everything they had and got a little assist from the SPTRs (non regulars can look up the term here on BN; it's easy) in the closing mins to pull out a win. The final score was 67-74 (box score).

Bruins fell behind early tonight by double digits after ASU came out hot from the 3 pt line. After playing some tough defense and great play from the bench late in the first half they pulled even at half (thanks to a clutch buzzer beating bomb from MR) and were leading most of the second half. Unfortunately just like the games against Washington and Texas things didn't turn our too well in the closing mins.

It got out of control in the closing mins when refs made probably the most questionable call of this regular season. As the Bruins were down by 1, DC drove the lane and converted on what should have been a 2 and 1: 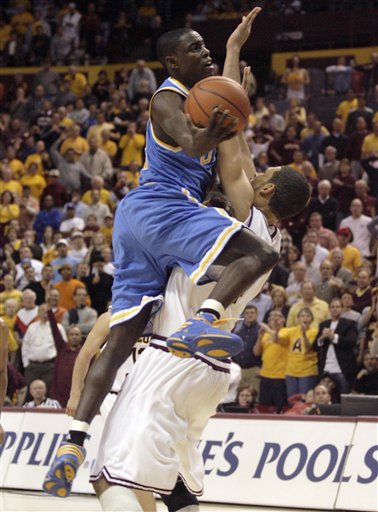 Instead the SPTRs called a charge and it pretty much was over after that.

Looking at the over all picture of this game the Devils deserved to win. They outrebounded us (24-18), racked up more assists (22-12) and shot better from the floor (60%-49%). JH had possibly the worst game of his UCLA career scoring exactly 0 points.

Still it would be nice if this conference could give us some competent referees. What happened towards the end was pretty ridiculous and its not the first time (nor will it be the last time) when SPTRS have had a direct impact on the result on the game.

Anyway, it doesn't matter. We have to go with the ebb and flow of the Pac-10 season. Losses like this happen and is not unexpected for a team full of freshmen. We are still tied for the conference lead and are in decent shape heading into rest of the season.

Our guys just have to keep at it. They need to come out and play better defense and get back their edge on defense on Saturday afternoon. For the bandwagoners and concern trolls, don't come back over here when things are rolling again. As for rest of us we have to stay even keeled through the ebb and flow of a Pac-10 season.