Which One's Pink? - The Bruins, Of Course - Get Ready For The Carnival For The Cure

Share All sharing options for: Which One's Pink? - The Bruins, Of Course - Get Ready For The Carnival For The Cure

Tomorrow, Head Coach Nikki Caldwell and the UCLA Bruins women's basketball team will host the first annual "Carnival for the Cure." Due to the possibility of rain, the event will take place on the first level of the Morgan Center.

The event is held to raise both money and awareness of breast cancer.

According to the official press release, "The event, which is being held by UCLA women's basketball team in conjunction with the Women's Basketball Coaches' Association (WBCA) and the Iris Cantor-UCLA Women's Health Education & Resource Center, will take place from 11am-1pm."

After the event, the Bruins will host the Arizona State Sun Devils in Pauley Pavilion.

The game is UCLA's "Pink Zone" game to help support and promote breast cancer awareness. UCLA will wear special white and pink uniforms, which will be auctioned off online after the game, with proceeds to be divided between the Kay Yow/WBCA Cancer Fund, the Revlon/UCLA Breast Center and the Iris Cantor-UCLA Women's Health Education & Resource Center. Both coaching staffs, band and spirit squad will also wear pink at the game, and the first 2,500 fans in the building will receive a free pink UCLA basketball t-shirt.

Last year, the Bruins also wore pink-trimmed uniforms in a game against Washington and the auctioned uniforms raised $5,000. Here is a picture of Chinyere Ibekwe. 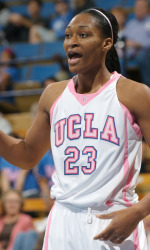 Here's more from the release:

The WBCA's "Pink Zone" initiative is a global, unified effort for the nation's coaches to assist in raising breast cancer awareness on the court, across campuses, in the communities and beyond. In 2008, over 1,100 teams and organizations participated, reaching over 830,000 fans and raising over $930,000 for breast cancer awareness and research.