As DG said following the Washington game few weeks ago:

"Right now, we just don’t have enough heart," UCLA forward Drew Gordon said. "At the end of the day, the other team wants it more."

Coach Ben Howland's UCLA Bruins embarrass themselves and humiliate Coach Wooden's program on national TV by getting massacred by Arizona.

It was a pathetic display of basketball in first half and early second half as an Arizona team with not so deep bench left JS and rest of the Bruin starters in dust: 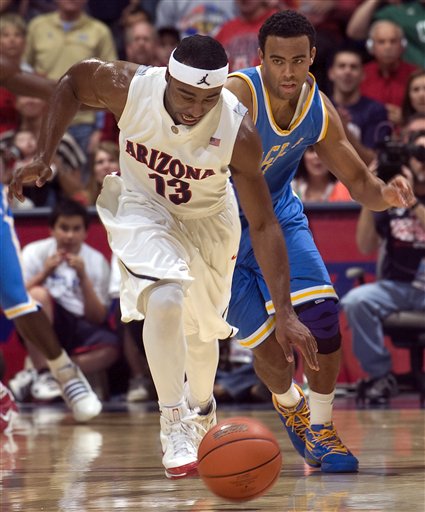 The final score is yet to be determined was 72-84 (box score). Doesn't Didn't matter really despite too little, too late desperate rally in the end.

Bruins were ugly. They were sloppy on offense, lazy on defense. They showed no hustle, no desire most of the game. Warriors such as AA, JF, LRMAM, LMR, and RW would have been humiliated if they were watching the game in person.

Notwithstanding the desperate rally our guys made late in the game which made the score close, this game was essentially over early in the first half on perhaps the worst stretch of Howland era since a blowout loss against St. Johns in his first year.

Right now this team should not consume itself with the thoughts of defending the Pac-10 championship or what seed it is going to get in the tournament.

This team needs to dig deep, look itself in the mirror, and decide whether it will fight back and show character like the Ben Ball warriors we saw in last three seasons.

Because as of right now as our freshman (perhaps the only guy who has brought fire and passion every game) we don't have the heart of champions. We don't look like a team that really "wants it." As mentioned in the second half thread below Ben Howland and his entire team should be embarrassed at themselves.

Calling the effort disappointing would be an understatement.