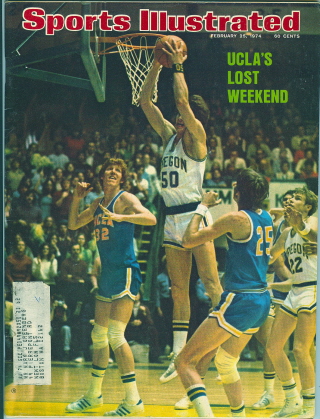 It became known simply as the Lost Weekend.

Twenty-four years later, Bill Walton still cringes at the memory of a team that went to Oregon with an 18-1 record and control of the Pacific 8 Conference and was spit out like some Division II program.

35 years ago, almost to the day, a Bruins team (that would end up in the Final Four) suffered a pair of unexplicable losses, much like our recent journey into the desert.

Indeed, it was the way the Bruins lost.

Friday at Corvallis, they blew an eight-point lead from early in the second half and were outscored, 26-17, in the final 12:51 against a team that came in 9-10 and started three freshmen.

"I guess you should be concerned when a team that's only 2-5 in our conference beats you," Coach John Wooden said, smiling wearily.

Saturday at Eugene, the Ducks, all of 11-9 when a national powerhouse came to McArthur Court, shot 61%, led by a sophomore named Bruce Coledren, who made 12 of 14 attempts. They stalled late and held UCLA without a point for almost 5 1/2 minutes, this team that a week earlier had lost in Los Angeles by 18 points.

And legendary Coach John Wooden, one year away from retirement and his 10th National Championship, acknowledged he might have made a mistake.

"The worst thing a coach can do right now is panic," Wooden said after the Oregon game. "I'm not going to do that now, especially with a team that has an 18-3 record.

"I made some changes in our offense this past week to give us more movement. I thought it would make us sharper, but instead it had made us hesitant. Maybe, in retrospect, I've made a mistake by making this change."

Nothing is automatic about this game. That's why the games are played. Mistakes are made and the measure of a man is how he responds to adversity. I'm proud the Bruins didn't pack it in yesterday when the deficit got to 25 (a lot of "fans" did). They showed character to get the deficit down to 9 late in the game. A couple of breaks and maybe some more threes fall and it could have been "heartbreak city." Didn't happen, but we know the Caretaker is busy with game tapes figuring out what went wrong. Meanwhile, the team continues to learn, mature, and build character through adversity.

Isn't that what it's all about?