Over the past few years, the Bruins have had their share of "must win" games. In the past, the Bruins have typically won such contests, but due to dropping a pair of road games last weekend, the Bruins faced their biggest must win game in a long time. Both teams played with the requisite urgency, the urgency that was missing for the Bruins last Saturday in Arizona. The Bruins take the first of what will be quite a few "must win" games from here on out, taking down UW 85-76 (box score).

While the Bruins came out active, they weren't finishing their shots and their plays (a very great man once said something about not mistaking activity for achievement), and for a while it looked like it was those missed easy opportunities that would spell trouble for the home team. Enter Nikola Dragovic. The sharpshooting Serbian showed his teammates how to match their focus with their intensity and activity, canning some early 3's and showing some crisp passing and the Bruins began to settle down in their offense. He was also active on the defensive end, and it needs to be restated that his improvement on that end of the floor has been remarkable. Shipp was again clutch, going 3-3 from beyond the arc, and DC made his presence felt down the stretch, constantly getting inside and shredding the UW defense. While JH seemed to be forcing things early, he stayed aggressive and started to play within himself and he began to play better at the end, capped by a sneaky move to beat the shot clock for a layin that put the Huskies in desperate straits.

The Bruins still had plenty of trouble keeping Brockman off the glass, as he seemed to have 10 rebounds before our subs were even in. He's difficult to handle even when boxed out, but when even that's not happening, then forget about it. Brockman kept UW in the game early with putbacks and second chance opportunities, but the Bruins kept rolling into the half.

The second half saw an early Bruin surge which fizzled by the middle of the period when the Huskies' full court pressure really got to Jerime Anderson. The kid has made great strides this year, especially in his ball handling, but that seemed to leave him tonight, and UW tied the game up. After a CBH timeout, the Bruins regained their focus on the offensive end, even if they were still allowing too much penetration. However, one got the feeling at that point that it was the Huskies who were now scrambling and desperate, and the Bruins kept them at arms length the rest of the way to stay in the conference race. 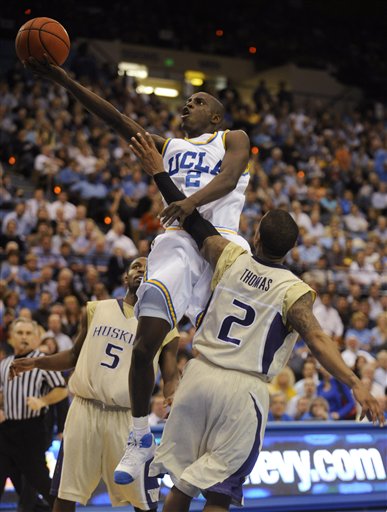 Isn't this a foul on DC? It sure was last weekend...

While our interior defense still left something to be desired, it's important to note that this is what Washington does, and some of their shots were still made under very tough conditions.

As the title states, we're Not Done Yet. Plenty of commentators were content to write the Bruins off after last weekend (and completely ignore the 4 teams before that that we wiped out), but we're Not Done Yet. Similarly, we aren't out of the woods either. We're still looking up at other teams in the standings, and until that is no longer the case, every game is a MUST WIN.

(Oh, and Brockman. You're a cheapshot artist. No excuse for that kind of crap at the end of a game just because you lost)