Share All sharing options for: Recruiting Home Stretch: Fighting Till The Finish

Ramona Shelburne from the Daily News marks an obvious difference in UCLA football recruiting between the regime of Coach Rick Neuheisel and the previous one through the words of a Trojan:

"It was like they just assumed I was going to USC," the former Oaks Christian High of Westlake Village star said. "They just stopped recruiting me. It was kind of like they didn't really want to go after the big guys, they just wanted to fill their class."

So if UCLA would've recruited him harder, would Tyler be in Westwood right now?

"I probably would've still gone to USC. I love it here," he said. "But you know what? If the coach they have there now (Rick Neuheisel) was there when I came out, I would've given them a better look. I haven't met him personally, but just from seeing him, you can tell he's got a lot more energy. Coach (Karl) Dorrell, was more laid back. Like you couldn't even get a read on him or tell if he really wanted you."

It was no sure thing Tyler would have qualified academically for UCLA. But wouldn't have been worth it to find out if the No. 1 high school running back recruit in the country, whose father is an alum, might come to Westwood

Well no one here is shedding a tear over Marc. Still it is interesting to hear from a Trojan how the former emperor had no clothes. He is clearly aware of and acknowledging the relentless tenacity we here at BN have been enjoying this recruiting season.

Shelburne notes how under CRN even a mellow individual such as Norm Chow (who came in with the perception that he wasn’t all that fond of recruiting) has been intensely engaged in recruiting, traveling all over the country:

We're assuming sometime during that stretch Chow managed to sleep and eat.

And speaking of Hasiak, Shelburne also notes unlike the past CRN and his staff never give up after setbacks in the roller coaster recruiting derby:

Hasiak is a good example. He was a longtime UCLA commit who switched to California but is now back in play. Similarly, defensive back Marlon Pollard of Cajon High in San Bernardino has gone from UCLA to Notre Dame and back to UCLA again.

"They're out there working their butts off right now," Kimbrel said of the Bruins' coaches. "They don't give up on guys. They fight for them all the way to the end, until they sign their name on (a letter of intent). In the past, if a recruit de-committed, that was it."

I have no idea whether we will end up signing Hasiak, Su’a-Filo or Te’o. We could conceivably lose out on all of these three uber talented recruits, yet it will not do anything to diminish the excitement CRN and his coaching staff has generated via their recruiting intensity in last few months. They have clearly sent a message to everyone across the conference and specifically to the coaches across town that the Dorrell days of coasting and lollygagging are over. As Ramona notes it wasn’t that coincidence that the Trojans lost their cool channeling their anxiety via Petey’s Poodle:

While the back-and-forth made for some fun reading, the lasting impression will have nothing to do with anything Norton or Neuheisel said, but just that anything was said at all.

"In the past, you'd never see USC complaining about UCLA," Kimbrel said. "Why would they? UCLA had no aggression, no assertiveness to complain about.

We just have two more days to go till the signing day. CRN was at Pauley on Saturday visiting with recruits: 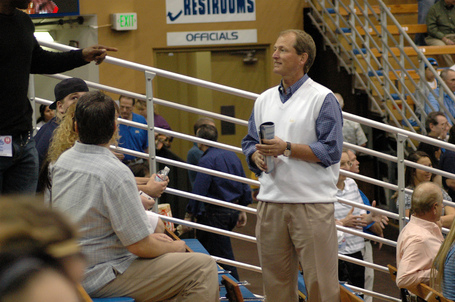 Later on Saturday night picked up another promising recruit – Luta Tepa from LB Poly – over the weekend. You can check out Tepa's highlights here.

It is going to be fun to track what happens with some of the aforementioned blue chippers over next three days. Again UCLA could potentially come up empty on Wednesday wrt to the last remaining targets. However, it really doesn’t matter considering what CRN and his staff has put together – one of the best classes in the entire conference (and a top-25 one) – coming off a 4-8 season. Imagine what he is going to do with 2010 class, if we manage to build on last year’s efforts by putting together a winning season in 2009-10. No wonder the poodles are barking across town.