OK, haven't done a Post-Game Thead before, but I figured somebody had to.

They hit 3s early and often against a step-slow Bruin defense, going 8-for-15 from long distance.

Taylor Rochestie went ballistic against a surprisingly wide-open defense, going 9-for-16, including 5-for-7 from the arc, to nail a career-high 33 points.

We brought some numbers, too.

Nikola Dragovic stepped up with a career-high 23 points, including 8-for-12 on field goals and 5-for-8 from behind the arc, incluidng 2 in the final minute of play.

PAA, still less-than-fresh off his dehydrated efforts of Thursday, produced another double-double with 13 points and 11 boards.

Darren Collison drove the lane in a desperate attempt to bring our Bruins back from the abyss, finishing with 20 points and 8 assists and a variety of circus layups in traffic: 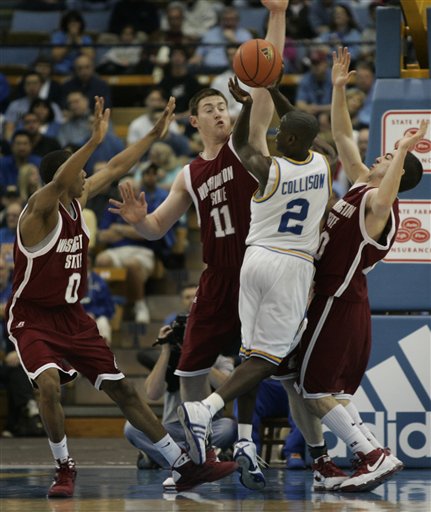 But another set of numbers stands out, as well:  1 point, 1 rebound, 4 assists, aka the partial box score line for Jrue Holiday.  A freshman started the 2nd half for us at shooting guard -- but it was the 6-5 Malcolm Lee, not Jrue.  Lee, at 6-5, seemed to have more defensive success against both Rochestie and Klay Thompson.  JH re-entered the game several minutes into the second half, but was almost non-existent, with only one point and four assists. Here is the full box score.

The score was tied, 42 all at the half.  But in a game where we went another six minutes in the second half without a bucket, the outcome was all-too-familiar.  And again, an opposing zone -- this time a 1-1-3 zone designed to double team our PGs at the top of the key -- lulled us into ill-advised shots and cooled the aggressive penetration that helped us keep the game tied at the half.

The last 2 minutes could have been an ending for the ages, one to rival the epic Gonzaga battle.  Sadly, it was not.  Too many NEAR-steals.  One too many NEAR-layups.  Far too many NEAR-sighted calls by the refs.

And it was nowhere NEAR enough.

But this was not a game won or lost by the refs, but by our Bruins.  Our defense seemed to show up ten minutes too late for tip-off, and even when we had a 4-point lead at several times in the second half, it seemed as though we had to claw our way uphill all day.

For the time being, at least, here's the Post-Game Thread.