Bruins Get A Much Needed Win

Share All sharing options for: Bruins Get A Much Needed Win

It wasn't pretty but we will take it.

Bruins pull out a much needed road victory against Stanford escaping from Maples with a with a 76-71 win. (Boxscore)

Once again the Bruins came out  flat looking slow and lethargic against an inspired Stanford Cardinal which came in and hit their first 7 shots (guess in last few days number of teams have looked "inspired" against the current Bruin defense). Once we fell behind by 14, the team woke up, tighten up on defense and thanks to JS's first half outburst got back in the game finishing the half within half point.

Bruins got the lead against Stanford in second half and held on even though it was a back and forth game for most of the second game. Bruins had number of chances to put the game away but one defensive breakdowns after another and offensive indecisiveness kept the game close.

As mentioned up top, JS got us back in the game and this guy was pretty key down the stretch: 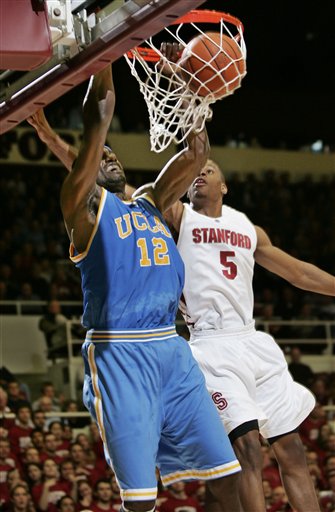 PAA made number of clutch shots including 4 huge FTs in the last mins to close the game out. He finished the night with 16 points. JS led the team with 24.

Again it wasn't pretty and there are number of issues that are still lingering from previous games. We still look sloppy on defense, indecisive on offense and often times getting beat on hustle points on the road. Still for now we will take this win and hopefully can use some of this momentum to put up a fight on Saturday night.

That's all I have for now, I will let rest of you thread the night away.