Share All sharing options for: UCLA Heads To Houston For Nation's Top Tournament 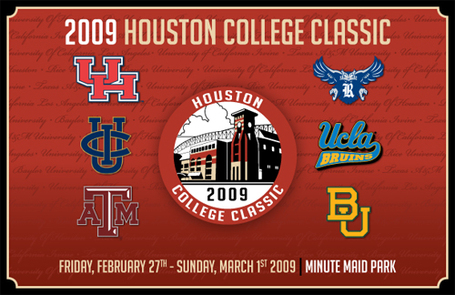 The #9 UCLA baseball team, fresh off two midweek losses, will head to Houston this weekend to take part in the top tournament the nation has to offer. The Bruins lost this past Tuesday and Wednesday night. Tuesday's 7-6 loss in Santa Barbara versus the Gauchos saw the Bruins leave 10 runners on base and multiple runners in scoring position late in the game. The chances were there, but UCLA couldn't take advantage of them. On Wednesday, Gavin Brooks took to the hill and continued to struggle. The southpaw walked two, hit four batters and allowed six runs without retiring a batter in the second. That put the Bruins behind early and their bats never got in the game as they didn't score until the ninth in their 13-1 loss. The good news Wednesday was the performance of Charles Brewer, who looked very good in three innings of relief. While they don't want to make a habit of it, losing in the midweek, especialy early in the season, doesn't mean much. College baseball is a game centered around weekend series and if the Bruins handle their business on weekends they'll be fine.

Now 2-3 on the year, UCLA heads to Houston to partake in a tournament whose six participants includes five ranked teams. The Houston College Classix, played anually at the Astros' Minute Maid Park is the nation's top tournament every year and this year has its finest field ever. Scouts from every major league team will be in attendance and one scout described the weekend to me as "the mecca of college baseball scouting." UCLA will open the weekend with a game on Friday (5 pm PST) versus #10 Rice. The Bruins will send Rob Rasmussen to the mound who gave up no runs and two hits in five innings of work last Friday. Rasmussen was throwing his fastball in the low 90's with his usual devastating curveball and surprisingly good changeup. Opposite Ramussen will be Mike Ojala who is coming off a solid start to open 2009. Ojala struck out eight an allowed only one run in 7.1 innings versus Cal Poly last weekend and will look to carry that momentum to this Friday. One thing working in UCLA's favor is Ojala's tendency to work backwards, from curveball to fastball, which suits the Bruin batters. Rice has a shaky 'pen so if the Bruins can get into it, they'll have an advantage. At the plate, Rice has Diego Seastrunk, who hit .353 last year with 61 RBI. Shortstop Rick Hague and 3B Anthony Rendon are two other bats to keep an eye on.

Saturday's (1:30 pm PST) pitching matchup will UCLA's Gerrit Cole versus #6 Baylor's Kendall Volz. Cole is the much ballyhooed freshman who looked very good in his first collegiate start. Cole devastated the UC Davis hitters last week with his mid 90's fastball, filthy slider and good changeup. He went six innings in his debut and struck out seven while allowing only two hits and one unearned run. He will face a much tougher test this weekend versus the Baylor Bears, who have a potent lineup. While Cole is dealing with a good Bears lineup, the Bruin batters wlll be dealing with the Baylor ace in Volz who they have held back to face the Bruins. Volz doesn't overpower batters, but he works both sides of the plate well and has good movement on all of his pitches. Volz looked good in his first start of the year, allowing only two hits and one run in six innings against an admittedly poor Pacific squad. The Bruins will have to be aggressive early if they want to hit Volz because if you get behind, he will use his array of offspeed pitches to get batters to chase pitches out of the zone. The Baylor offense goes deep, but if there's one guy you want to keep an eye on it's 1B Adam Hornung who already has three homers on the young season.

UCLA will send Brewer to the hill in the early game (9 am PST) on Sunday versus #5 UC Irvine. Brewer only gave up one run in his start last Sunday, but struggled with his command and was pulled after only three innings. He made a relief appearance on Wednesday and looked very good. He struck out four in three innings and gave up only one run that while earned, was due to some shoddy defense. As has always been the case with Brewer, the stuff is there, but he needs to hit his spots. UC Irvine has yet to announce their starter for the game. They came into the season with a few guys in contention for the Sunday spot and last weekend didn't help sort anything out. Crosby Slaught, who was good in the midweek role in 2008, but couldn’t make it out of the fourth inning last weekend is one option. The other option is sophomore RHP Nick Hoover who was roughed up in Hawaii, but was outstanding in JUCO ball last year. Either way, the Bruins should have the advantage on the mound. That doesn't mean a victory for UCLA though, especially against Irvine. The Anteaters execute better than any team in the nation and do not make mistakes. They move runners over with bunts and hit and runs better than any team there is and they no not strike out. Ben Oroff is a pest int he two hole and the Anteaters three hitter Jeff Cusick makes up for his lack of power with his ability to spray the ball to all fields. The Anteaters have one of the nation's top closers so if the Bruins get down in the late inning they'll be in trouble, but the Irvine bullpen isn't strong as a whole and should be a weakness, especially at the end of a long weekend.

The Bruins are in for quite the test this weekend. They'll play the # 5, #6 and #10 teams in the country, in a big league park that will be filled with scouts and thousands of fans. It will be a good test for the whole club, but especially for the young guys who haven't experienced high pressure situations before. The video of the games will be available live on MLB TV for you big league fans with a subscription. The link is at the bottom of this page. Gamtracker and the radio call will be free at the official site. GO BRUINS!!!