Not sure where to start. Bruins finally flashed their potential as Ben Ball warriors by pulling out probably the toughest win of 2008-09 season. Bruins sweep the Bay Area road trip with a gutty 72-68 win (boxscore).

The decks were stacked against them. They came into the game not playing so well, losing 3 out of their last 5, and looking very shaky against a bad Stanford team at Maples. Add into the mix, a fired up Haas Pavillion, and a Cal team smelling blood, looking to clinch an at large NCAA bid and possibly more given ASU's loss earlier in the day, things were not looking so great for Howland's Bruins.

They got off to another mediocre start, looking sloppy on defense, incredibly frustrating on offense (blowing layups and missing FTs), and getting outhustled on the boards. And when they coughed up a 5 point lead early in the second half I thought it was going to be one of those games like we have seen previously this year, when the other team outwilled us to another frustrating loss.

Well boy am I glad to be wrong. Thanks to this guy: 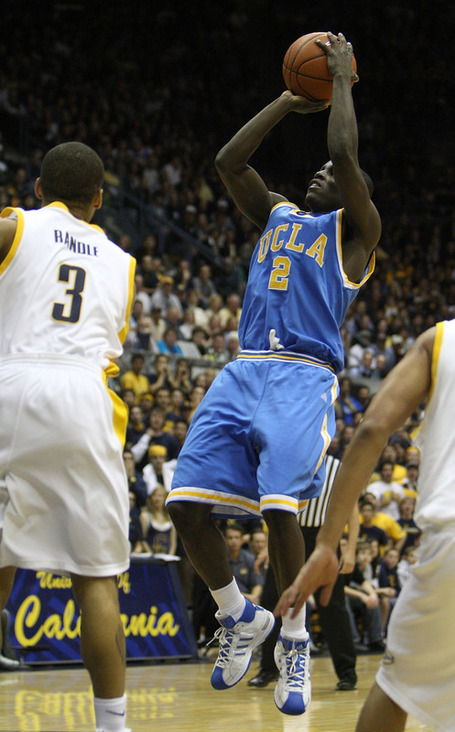 DC perhaps put together one of his most clutch performances in his legendary Bruin career to pull out what could shape up to be a key win. When the game was on the line DC took over in the second half and keyed a blistering 16-2 run leading to UCLA's toughest win of the season.

The game got close again in the closing seconds but the Bruins held on with some clutch FTs and a huge shot from DC. DC finished the night with 22 points and 6 assists.  Besides DC, PAA and JS chipped in with 12 points. Despite some atrocious defense early on ND also contributed with 12 huge points including being in the middle of a 7 pt possession which the WWL analysts obsessed over much in the second half.

With a record of 22-7 (11-5 in the Pac-10) Bruins still have a shot at a share of the conference title. But that really doesn't matter. What matters is for the Bruins to use the momentum from this road sweep and use it finish it with a great home stand honoring three of the greatest Bruin seniors in Post-Wooden era. They sure got the goodbye party started tonight.

There is lot to talk about from this game which we will get to later. For now enjoy yet another Bruin win in the Bay (and making Digger sound like a toolbag ... again).