Share All sharing options for: Bruins Shred the trOJans

I believe this will go down as one of the great days in Bruin history. First, Coach Rick Neuheisel imposes his Relentless Optimism on recruits and the rest of the Pac 10 in football, then we get to cap the night with a Bruin Dunk-a-thon, and the trOJans of usc were good enough sports to show up for it.

Today we saw aggressive Ben Ball defense, decisive offense clicking both inside with Aboya and Shipp and outside with Drago (4-4 3pt in the first half), and of course, Lil Romeo (Bow Wow's better). The Bruins started off hot in the first half, stomping on the trOJans throats, forcing them into 14 turnovers and cramming the ball down their throats on the break. The fast start ensured that garbage time was plentiful, and CBH was able to substitute at his pleasure en route to a 76-60 shredding of the trOJans in Pauley (box score). 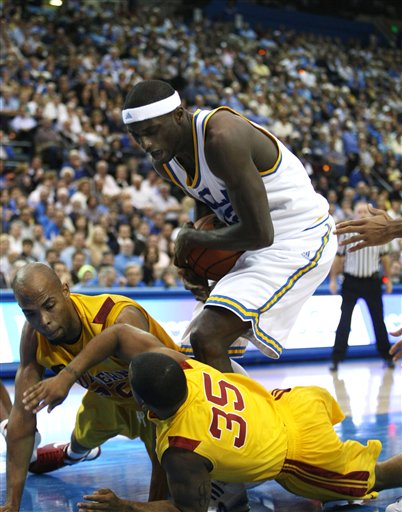 Aboya tells two trOJan chumps that it's HIS ball

For three games now, the Bruins have made postgame writing difficult because too many players did well. Josh Shipp certainly deserves a shout out though, as he was absolutely fearless and hit the deck many times and got himself to the line, picking up 19 points in the process to lead the Bruins. Dragovic, Holiday, and Aboya joined him in double figures. Drew "The Commissioner" Gordon almost cracked double figures as well with 9 points, picking up most of them using the trOJans skulls as target practice through the hoop on an array of dunks.

Collison was not-so-noticably subdued on the offensive end with 4 points, but had a hand in making Daniel Hackett's life miserable as he fouled out with 10 minutes to play and a piddly pair of points.

The Bruins complete a regular season SWEEP as they burst the trOJans once again and are (for now) in first place in the Pac 10. More importantly, they are sustaining the momentum from the Bay Area school victories and appear to be improving at a much faster pace than earlier in the season.It's hard to say how far  this team will go, but like the recruiting rollercoaster this morning, I'm just going to sit back and enjoy the ride.