From Ted Miller on WWL:

USC signed the top class, but the Pac-10's big winner on signing day was Rick Neuheisel.

Of course, the Bruins late run earned them a highly rated class that will help on the field in years to come, but the larger story is Neuheisel.

The attention on Neuheisel leading a tenacious -- and ultimately successful -- recruiting charge means that the endlessly discussed baggage he carried to Westwood when he was hired a year ago is being pushed into the background.

The story is hope and potential and winning a couple of battles with USC, not Neuheisel's controversial tenures at Colorado and Washington.

If someone is calling him "Slick Rick," Bruins fans can answer, "Abso-freaking-lutely!"

Well that so called "baggage" was pushed in the background for a while ago (despite pathetic attempts by Petey and his poodle to push it to the foreground when they were getting beat for recruits). All of that really doesn't matter as long as CRN continues to run this program the way he has run it since his arrival in Westwood. If people want to talk about "baggage" and Pac-10 coaches, they should probably keep a close eye on Pom Pom Pete across town and his protege up in Washington, who seem to be committing secondary violations on a weekly basis.

All Neuheisel has done since his arrival in Westwood is to light a fire under entire Bruin Nation, get his team to fight, scratch and claw every game, and then use the same approach of relentless tenacity to pull off one of the best signing day in Westwood in almost a decade: 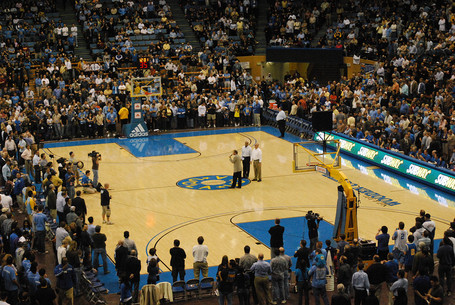 Now more than ever Neuheisel has proven how throwing this community's support behind him during the roller coaster hiring process last December was more worth the effort.

We still have a long way to go (as we like to say often here on BN) but the signs are clearly pointing towards for a bright long term future for UCLA football.