Apparently before the game today Digger Phelps, the hoops "analyst" on WWL opined that the Irish will beat the Bruins today because, "Pauley Pavilion is our second home."

Well here is to Digger mouthing off about UCLA again and again. Ben Ball warriors make an emphatic statement on national TV by humilating the Irish. The final score was 89-63 (boxscore).

As good and as dominating our offense was today, once again it all started with this ... our DEFENSE: 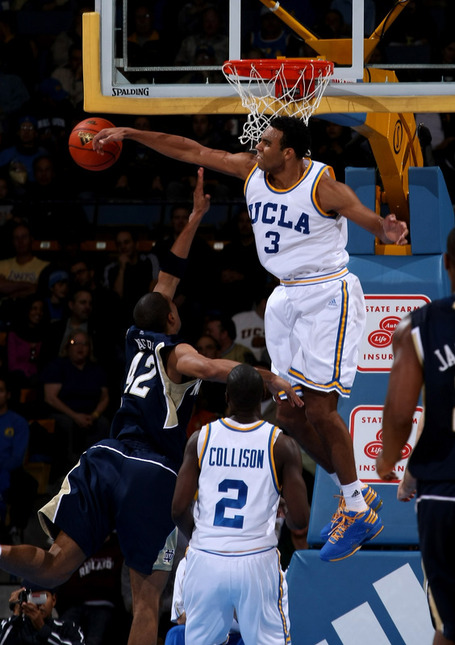 That was JS sending a loud and emphatic message in the second half but the tone of defensive domination was set early when savaged Luke Harangody with a monster block. Since then it was all Ben Ball warriors in every facet of the game. ND and rest of the Ben Ball warriors bottled up Harangody for 5 points for the entire game sending a statement all across the nation.

Once again we are presented with the good problem to pick out the player of the game. it was a total team domination. AA2 PAA played like an animal terrorizing basketball players instead of campus squirrels. DC controlled the flow on both ends of the court. JH was just a natural putting on dazzling display of offensive skills and Ben Ball defense. To top it off Bruin bench kept the pressure on via JA, ML, DG, and MR.

We will have more on this tomorrow. Bruins close out a perfect home stand answering all questions since their trip to Seattle. Now the challenge becomes to keep up this level of play when they head to the desert this week. As mentioned above, if we keep playing defense like we have last three games and maintain the all out tenacity, we are going to be all right.