As many expected Bruins will take on the Cougars tonight at Staples in their first game of the Pac-10 tournament. Cougs had no problem blowing past the hapless Ducks in a "satisfyingly boring" game from their fans pov.

I don't think our guys need a lot of motivation to get fired up for tonight's game. I am sure this is pretty fresh in their minds: 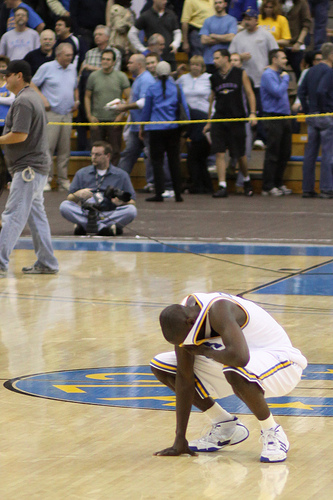 And I am sure they can remember very clearly how the Cougars cut up the Bruin D embarrassing it on John & Nell Wooden Court. In case anyone need a refresher, here is Meriones post game recap fromthe last time the Ben Ball warriors played these guys:

They hit 3s early and often against a step-slow Bruin defense, going 8-for-15 from long distance.

Taylor Rochestie went ballistic against a surprisingly wide-open defense, going 9-for-16, including 5-for-7 from the arc, to nail a career-high 33 points.

Oh and don't forget in a crucial stretch late in the second half when we could have pulled out the game, we went scoreless for six minutes, repeatedly getting stiffled by their 1-1-3 zone. It was ugly.

It was ugly fopr JH who was getting torched by Klay Thompson. It was ugly for DC who got owned by Taylor Rochestie. It was ugly for ND who repeatedly got burned because of lazy defense and being slow on his rotation. ND scored 23 points but all of that was offset by being responsible for number of breakdowns on defense leading to 12 crucial points for a role player like Caleb Forrest. Suffice to say that ugly performance cost the Bruins a Pac-10 title for fourth straight year.

So how will the Bruins come out tonight? Well JH is pledging to play better defense this time around:

It was a particularly tough day for him, chasing Klay Thompson around the court as the Cougars guard scored 15 points in the first half.

Holiday talked this week about the season-long process of improving his technique when trailing shooters, making sure he doesn't cut underneath screens or get bumped off to allow separation.

"The next time I trail somebody," he said, "hopefully I'll do it the right way."

Well I hope this game Howland doesn't waste any time in going to ML if he can't hang with Thompson.

Howland and his players are talking up this tournament because of their chances to improve their tourney seedings:

"Losing never comes in," Holiday said. "He's talking about going to Portland or going to Boise. Those are the only places he talks about."

Howland said the conference tournament is always important because it always has a bearing on the NCAA seeds.

Two years ago the Bruins lost in the first round of the Pac-10 tournament and dropped to a No. 2 seed. It meant facing top-ranked Florida in the national semifinals, in which UCLA was blown out, rather than the title game.

"It definitely matters the better seeding you get, (because) percentage-wise, the better chance you have to move on in that tournament."

"We could jump a couple of lines, and that could be important," Howland said. "It would have been important to be a one seed two years ago and not play Florida when we got to the Final Four."

Although Howland is usually tuned in to the seeding of his teams, he was uncertain about which region the Bruins will wind up in when the 65-team field is announced Sunday.

"Our goal is to stay in the West for all four games," Howland said.

Well I think all of that will be moot if the Bruins come out and play defense last time they faced against these Cougars at Pauley.

If they want to make a dent in terms of improving their NCAA seeding, it would have to start with playing the kind of lock down defense we are used to seeing from a Howland coached team during this time of the year. It would entail DC, JH, ND and the entire team playing lock-down, inside the jersey defense, suffocating the other team with severe on ball pressure, lighting quick rotations, and not giving up any easy shots.

I am not worried about our offense. We have proven our ability on offense all season. The numbers prove that. I do think we will need to be focused in a sense that we are not blowing easy layups, drunks and screwing up on transition opportunities like we have done in a number of recent games this season. I would hope that a sense of urgency around this time of the season (especially if they are really gunning for that number 3 seed in the West) would enable them to mentally zero in on those situations. For i.e. during this time of the year (or any time I suppose) I rather have these guys go for the sure shot layup, instead of trying to get on the SportsCenter highlights.

What I am really uncertain about our team right now is whether they can play championship level defense. I am not sure if they can.

Tonight would be a good start to proving doubters (about their defensive ability) like me wrong. Of course just like the entire BN I will be rooting likle crazy for our Ben Ball warriors to do exactly that and live up to the nickname we gave this program four years ago. LET'S GO.

Our game doesn't tip off till about 8:30 pm PST (on FSN) tonight. We will have the game thread up around 7:30 pm PST. We will also have a pre game thread going up around 4:00 pm PST for folks who are tracking/watching games from around the country as well as other action in the Pac-10 tourney.