Share All sharing options for: Bruins Cruise Past Cougars

Bruins open the Pac-10 tournament in style as they cruise past Washington Cougars (the last team to beat us this season) by a score of 64-53.

Here is the boxscore. The biggest difference this time around was the appearance of classic Ben Ball defense. DC, JS, PAA and rest of the Ben Ball warriors lived up to their nicknames by throttling Rochestie and the Cougars, holding them to percent shooting.

On offense it was JS early on with some smooth shoots and we also had our general attacking the rim relentlessly in the second holding on to the double digit lead we build at the end of first: 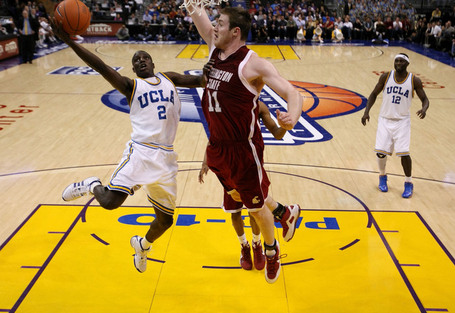 DC finished the night with team leading 15 points. ND chipped in with 12 and JS had 10.

Despite the comfortable margin of final score, the Bruins could have have played even better. There were number of instances during which we blew easy shots on fast break opportunities, blew layups and were sloppy on offense.

Still tonight our guys finally showed the signs of playing that lockdown, suffocating, classic Ben Ball defense, forcing the other team to throw up altered shots, and look somewhat frustrated.  Our backcourt held Rochest to 1 for 8 (6 points) and JH did a great job Ding up Thompson holding him to 2 for 11 FGs (5 pts). I am assuming Howland challenged his backcourt tonight and they responded accordingly. They imposed their will on the Cougars.

Now the challenge becomes to sustain this momentum and bring the same kind of effort on defense tomorrow night and also ramp up the focus on offense. We can't wait. It's March.