So did last night signal the reemergence of hall mark Ben Ball warrior defense we haven't seen much of this season or were the Bruins lucky to face off against the Cougars on their bad shooting night? BTW somehow majority of the teams that faced off against AA/RW led Ben Ball warriors over the years would somehow manage to have their worst shooting nights too. Anyway, given the fact that the Bruins haven't been consistent on defense this year, I think the answer to that question is the key factor on whether the Bruins can advance past tonight's game.

FWIW I thought this quote from Tony Bennett (whose Cougars gave a valiant effort despite getting blitzed early) was very encouraging for us:

"They upped their pressure and they climbed into us," Cougars coach Tony Bennett said. "They were more physical than we were. They ran harder and they were a tougher team to play against."

We were accustomed to reading post game quotes like that from opposing coaches in previous years. We just haven't seen much of it (actually I can't remember any this season) this year. That was the first game in a long time in which the Bruins appeared to be the more physical team. While there were instances during which Rochestie was getting around DC on his way to the rack (he was getting around JA too), the ball pressure from DC, JH, JA and rest of our perimeter players was solid last night. PAA certainly took note:

"Jrue and Darren did a great job. I think this time they were more focused. Last time they were trying to help (on defense), but this time coach wanted to trail them everywhere they go, and pressure them on the ball to make it difficult for them to run their team."

As did Coach Howland:

It was Holiday, temporarily benched in the February game because of his defensive problems, who effectively put this game away with about 10 minutes left, his three-pointer good for a 47-30 lead too big to overcome.

It sounds like JH took his defensive performance against these guys in the last game personally and attributed last night's better effort to more intensity:

"He got the best of me," Holiday said earlier this week, adding that he and his teammates "have to play more intense defense."

That's exactly what they did Thursday, Holiday scrambling after Thompson, who was limited to five points.

While JH played better defense last night I thought he was responsible for the two daggers last night. The first dagger came in first half when his 3 pointer put us up 18 at 23-5. I think that was the shot which effectively allowed our guys to take control of the game. I thought the second dagger came late in the second half when he drained another 3 bomb to put us up by 17.

What was interesting to watch how he hesitated a bit before he took that first shot that put us up by 18 in first half. He can be maddeningly inconsistent. At one moment he looks effortless like Magic Johnson zipping those perfect laser passes on a break or on a half court set and then he often follows it up with over dribbling and getting sloppy with the ball on next possesion.  No doubt the kid has potential written all over him. It will be intersting to see where he finally puts together that complete package.

On DC's part he sounds confident that the Bruins can play at this level for rest of this season:

"If there's any team that will hit that switch, it will be us," senior guard Darren Collison said. "We have the experience. We have the talent. It's not too hard to find that switch, and once that switch is on, it's going to be a lot of trouble for a lot of teams in the tournament."

The Bruins (25-7) used a 21-0 run to build a 20-point lead midway through the first half behind an early 3-point barrage, tenacious defense and, quite frankly, some poor shooting by the Cougars, who made just 30 percent of their attempts from the field.

"That was definitely one of our best defensive efforts in quite a while," Bruins coach Ben Howland said. "That's what it takes to win in postseason play."

And speaking of efforts we have to talk about JK, who IMO is showing signs of emerging out of a funk. I thought he had solid games in recent home stand after coming off nagging injury issues during the Bay Area trip. I thought JK perhaps put together the best effort of this season last night. He tied for the team with 6 rebounds and scored 5 key points off the bench. More than those numbers though what I appreciated was his defense. He was playing intense D with quick rotations and going all out in crashing for rebounds. I really hope JK can keep this up because it will be huge for our team tonight against a good rebounding team (btw Trojans outrebounded the Bears by surreal margin of 51 to 25 last night).

Also a very interesting game for JK's frontcourt mate ND. ND finished with 12 points and 6 rebounds last night. What's interesting was that he got most of his points from inside. He only attempted 2 3 pointers and didn't connect on any of them. Instead he was pretty effective in posting up and cutting to the rim covering three times on perfect passes over the top from DC and JH. If ND can be that effective from onside on a consistent basis to complement his outside shooting, it will bode well for the team. He still sometimes gets lazy on defense though and slow on his rotations. Hopefully reemergence of JK will drive him more to get better on defense.

Elsewhere it looks like DG's intensity comes from playing hockey:

"I credit most of my aggression to playing hockey," Gordon said. "It was fun. I'd love to get back on the ice, even for a free skate."

I love the kid's passion but I think he just has to get under control a bit. There is no need to pick up technical fouls on a consistent basis. He picked up another one last night. I think he can still maintain his energy and intensity without making things difficult for his team (which could excercebate situations in close games). I am assuming that is exactly what DC has been telling DG and others in certain situations when he gets a little too heated: 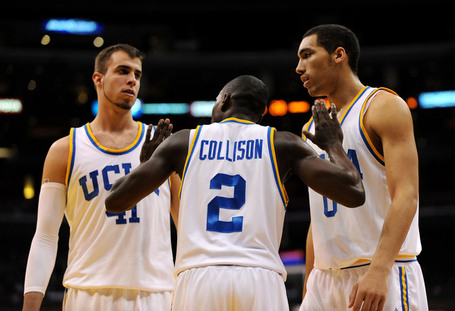 Bruins will have a tough game tonight against a team which is holding on to a desperate hope to make the Big Dance. The Trojans will throw everything they have to get their season making win. And judging by what we have seen from Hackett this season (I am sure JS remembers his last game really well), it will be imperative for DG and all of our guys to be ice cold and composed in situations when they will get baited to get into confrontations.

At this point of the year, there is not much scouting to do when it comes to playing Trojans. We know what the deal is. DC and JH will have to keep ratcheting up their itnensity on defense and our front court guys will have to hold their own, going all out for rebounds. Our guys will need to stay disciplined, focused and make sure they are executing whenever they are getting easy opporutunties on breaks. If we can come out with the same level of intensity we came out with last night, I like our chances.

Our game tips off around 8:30 pm PST. We will have our game thread up about 30 mins before the tip off. We will also have a pre game thread going around 4 pm PST. Enjoy the prelude to Madness.