We will have lot more to say tomorrow but suffice to say this is yet another one of the more embarrassing and humiliating defeats in Howland era at UCLA.

Congrats to Tim Floyd and his Southern Cal Trojans. They move on to the finals of 2009 Pac-10 tourney by pounding a bunch of lifeless and listless Bruins by a score of 65-55. Here is the boxscore.

They came out to play. They came out with more desire and with sheer will power they throttled a bunch of disinterested, unfocused, heartless Bruins who were looking to coast to the NCAA.

It was the Trojans who played like "warriors"outrebounding and outhustling us time and time again ... 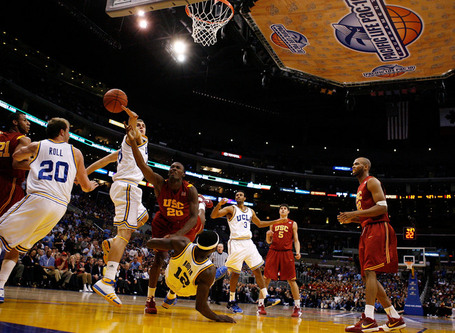 ... while the Bruins were looking for an easy road to the NCAA:

Ben Howland's team except for a little desperation towards end of the game showed no heart and not a hint of the pride that made famous by AA, RW and previous Ben Ball warriors.

At this point I don't really care what happens with this UCLA team. It doesn't matter what seed they get because if they play like this they are going to get bounced in first week. They can't just come into thes games and think they can turn some magical "switch" on.

Oh and let's not whine about the SPTRs. Sure they were bad but we didn't lose this game because of some bad calls. We lost this game because we went up against a team that was more inspired, fired up and played with a sense of urgency and pride in their defense we were accustomed from our team. Everyone in this team including Ben Howland and his senior leaders should be ashamed of the effort they gave tonight.

Nothing more to say on this ugly night. Perhaps there is a silver lining and we will hear coach and player speak about learning a lesson from this loss and using it to make a run in the tournament. Yet given what we have seen from this team all season - "wildly inconsistent defense" (as noted by Donnie Mac during half time) - to say that I am not hopeful would be an understatement.