Off to Philadelphia: Hello Virginia Commonwealth

Share All sharing options for: Off to Philadelphia: Hello Virginia Commonwealth

So the Bruins will have to pack their bags for Philadelphia to meet the Rams from Virginia Commonwealth Rams, champions of the Colonial Athletic Conference (they crushed George Mason in their conference finals): 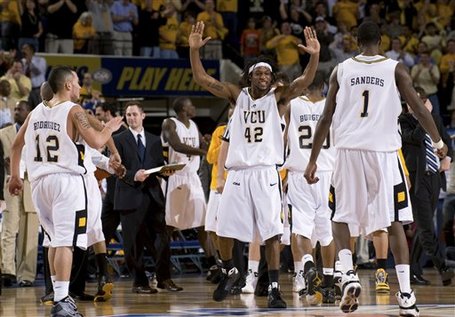 Our first round opponent in 2009 March Madness. For those who want to start right away to get to know this go here (official site), here (Sportsline.com) and here (WWL). But if you want a quick flashback here is a reminder: it's the same program that upset Duke in a first round game just two years ago.

In other words this is the toughest first round opponent UCLA has drawn since taking on Bobby Knight's Texas Tech team four years ago. Here is the full bracket. Our game is going to be on sometime on Thursday but the tipoff hasn't been scheduled yet.

It's a tough draw but that's what we get for coasting in the Pac-10 tournament (and at various points this season).

If you have seen VCU this season now is the time to share your takes. Discuss this game and rest of our bracket (and the whole field). Fire away.