It's not just Seth Davis who is dismissing Ben Howland's Bruins: 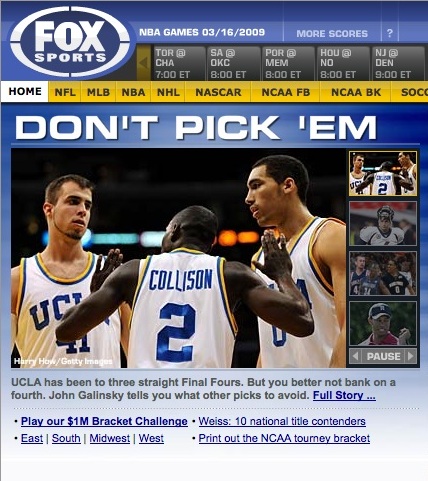 Over at Sportsline.com only 1 of our their 4 "experts" is picking UCLA to go beyond the second round. Otherwise everyone else thinks Bruins will be done by this weekend if not Thursday night.

Luke Winn from SI.com is "not buying" VCU over UCLA but even that "endorsement" is much to talk about when he says this:

The worst geographical draw was handed to ... UCLA. The Bruins will be traveling 2,395 miles to Philly's Wachovia Center to play Colonial Athletic Association champ VCU ... while the Rams and Larry Sanders' posse only have to travel 198 miles. If UCLA manages to win that game, it'll likely play Villanova ... which is playing in its home city, on what's essentially its alternate home court. Ouch.

Ouch is right. Guess we should have taken care of business v. Washington State and Arizona State at home or against the Trojans at Staples. Oh well.

Guess what we can hope for right now is to see this team get fired up reading or hearing from doubters all across the nation. I would like nothing more than this team to show up focused, fired up in a cold blooded way and methodically take care of VCU on Thursday night. Is it going to happen? Guess I am not sure this time around like I was in last three years. In the comment section the schully implores for a "little more faith" by comparing this year's team to the one from 05-06:

This season has had its disappointments and I’m not expecting our team to make a Final Four, but I still have faith. My first year, JF, LMR, AA made that surprise run to the Final Four. We were a 2 seed, but it seemed like in every game we played we were the underdog. We didn’t see the heart of that ‘06 team until the very end of the season, maybe not even until the tournament. I’m not saying that this year’s team is anything like the team 3 years ago, but still, don’t count them out before the tournament even starts.

Well I am not counting our guys out. But I am not sure if we can really compare this year's team to the one from 2005-05. That team did in fact turn the "switch" on after a humiliating loss to Southern Cal at Sports Arena and never looked back. Not only did they pull out two money games in the Bay Area to clinch the conference, they destroyed the competition in the Pac-10 tournament. It was pretty clear how that team was clicking on all cylinders heading into Madness. This year is a little different.

Here is to our guys providing all the doubters wrong this week in Philadelphia. We can always hope.