Yes, the Bruins "survived" in every way that is possible staving off a last second shot by the media's Golden Boy Eric Maynor to win 65-64 (box score). The reward? A date with Villanova on Saturday on what is evidently their home floor. It's great to move on. But if the Bruins want to keep dancing, they're going to have to show us and the nation something different than what they showed us tonight.

There were highlights to be sure. Shipp emerged as a playmaker and delivered in the clutch when the offense was stalling in the middle of the second half. Jrue took over for DC and showed us all his potential at the PG position. The defense appears to be back as well, as VCU shot 41% from the floor despite what seemed to be a ton of dunks and layups near the end of the game as they made their (terrifying, horrifying) run at us down the stretch. These three factors will be instrumental in any future success we have. 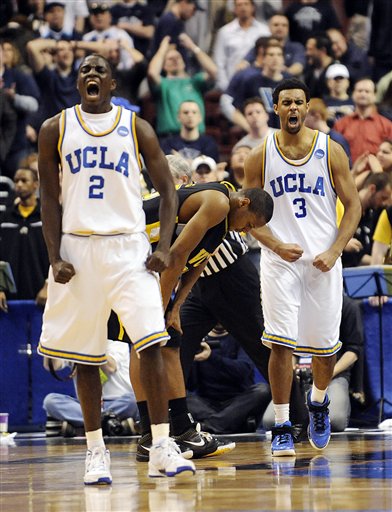 My complaints about how that game was called could fill a book, but for now I'd like to concentrate on what WE can do on Saturday, so I'll just say that if those weren't SPTRs, they were sure as hell doing a great impression of them, and I'll leave it at that.

We cannot afford to do this again. By "this" I mean hang our regular rotation out to dry like we did near the end. I firmly believe that this is at the root of all the problems that came down near the end of this game. Now maybe Coach knows something that I don't (about his personnel, obviously not about basketball), but I saw some tired legs out there, made even worse by the fact that we were being full court pressed on every possession. I fully expected to see a Lee sighting but he was nowhere to be found. I hope that Lee will find a way into our rotation against Villanova. He's too valuable as a defender to leave on the bench.

I'm going to assume that sitting Gordon has something to do with his knee, so I won't go into that as much, but with Drago actually playing better help defense than we've seen over the past few weeks, his absence wasn't as noticeable. And yes, Jerime looked a little shaky in his minutes out there, but this might be a pill that we will have to swallow at this point, because we absolutely must have an effective Holiday and Collison in crunch time.

I feel my heart drop into my stomach every time one of our layups rims out. We did that plenty today, and while a lot of those were the result of fouls that weren't called, a lot of them were NOT. We are not a good enough team to be able to leave points on the table.

It is distressing to see us take the air out of the ball for 20 seconds near the end of games. I will hedge this by saying that we did a better job getting the shots we wanted in this particular game, but that's not always a guarantee, especially if our guys are tired. The next time it doesn't work could easily be the last time this season that it doesn't work.

So now where are we? Well in the second round for one thing. We survived what can only be described as a hack job by the officials the likes of which I hope to never see again. We played our starters big minutes, perhaps forcing CBH's hand as far as utilizing his bench for Saturday. We saw a defense that we've quite frankly had trouble with all season long - the full court press - for almost 40 minutes and we're still alive. We probably wrecked a LOT of brackets because of the advice of, well, pretty much all the pundits that gleefully told everyone to pick VCU. So I think it's only fair that we reset at this point.

As amazing (or sobering depending on your POV) as it is, we are now officially playing with house money. 6 seeds are not supposed to go to the second weekend (or to the second game if you believe the pundits). We now face off with a Villanova team coming off a sobering scare of their own on their "home floor". It's going to be rough, and we still have details to iron out as I said above, but at the end of the day (and hopefully at the end of Saturday as well), only one thing is important in March. One ironclad rule of law that supersedes all others: Survive and Advance.

PS. 1600 comments for the game thread? You guys are awesome.