UCLA Begins Pac 10 Play With A Trip To USC

Share All sharing options for: UCLA Begins Pac 10 Play With A Trip To USC

After a series win at East Carolina last weekend and a week off as the players took finals, a physically, but maybe not mentally rested UCLA team will head across town to play USC in their first Pac 10 series of the year. The 5-12 Bruins are off to a rough start this year, but finally got themselves a series win and can take some momentum into conference play, but with finals this week it will be worth keeping an eye on how fresh the Bruins look. The series will be played Saturday-Monday instead of the usual Friday-Sunday to accomodate UCLA's finals schedule.

Just like the Bruins have struggled, USC has as well. While they did not come into the season with as high of expectations as UCLA, the Trojans were picked by many to make a regional for the first time since 2005. Now in his third year at USC, head coach Chad Kreuter is on the hot seat and is clearly aware of it. Prior to the season USC backed out of the Houston College Classic and made sure to schedule some sure wins to ensure a regional berth. Those sure wins have been anything but that though as the Trojans are off to a 7-8 start despite their less than challenging schedule. The three games versus UCLA this weekend are games number six, seven and eight of a 13 game homestand for the Trojans and the heat is on them to rack up some wins while at Dedeaux Field. Counting on beating UCLA hasn't been a good strategy for the Trojans lately though as the Bruins have take 7 of the last 9 from their crosstown rivals. 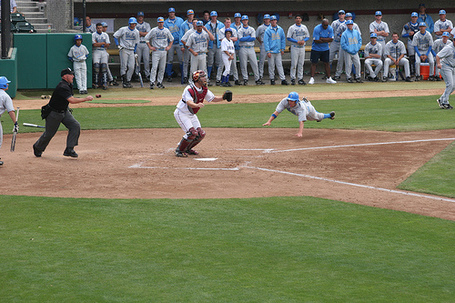 Saturday's game (12 pm PDT) will see a change in the UCLA rotation. Gerrit Cole has been elevated to the #1 spot in the Bruin rotation and will be charged with throwing the first pitches of the Bruins' 2009 Pac 10 season. Cole is 1-2 on the season with a 3.15 ERA and is comin off a strong performance at ECU. In Greenville, Cole gave up two homers for three runs, but in five innings (he was pulled following a game suspension due to rain) he struck out 12 Pirates. Opposite the sensational freshman will be the USC ace Brad Boxberger. Boxberger, a junior, is 2-1 on the season with a sterling 1.69 ERA and is coming off a start versus Winthrop where he struck out 11 in seven innings. As a freshman, Boxberger was excellent and compiled a 3.20 ERA, but injuries derailed him last year. This year, Boxberger is back to challenging hitters and more often than not, he's won those challenges.

UCLA will send Rob Rasmussen to the hill on Sunday (2 pm PDT). The southpaw got smacked around last weekend as the Pirates touched him up for seven runs, all earned, in only two innings. That outing caused his ERA to jump over three runs to 6.00, but the UCLA offense saved him from picked up the loss and his record remains 1-0. Rasmussen threw far too many balls versus ECU, something that he cannot afford because he doesn't have an overpowering fastball and his best pitch is a curveball that requires he get ahead in the count. On Monday (6 pm PDT) Charles Brewer will get the nod for the Bruins in his first night start of the year. That night start should benefit Brewer who is a fly ball pitcher and will have the damp night air working in his favor. Brewer has improved with just about every start this year, but seems to be cursed by poor fielding just about every trip to the mound. Last week he gave up six runs, but only one of those was earned as the extra outs given to the Pirates due to errors forced him to throw a lot of pitches. Brewer also struck out five last weekend in his four innings of work.

USC has yet to announce their starters for Sunday or Monday. Kevin Couture is likely to get one of the starts. He has a team leading three wins this year, but a 4.32 ERA and opposing batters are hitting .273 against him. He is coming off a strong start though as he allowed only three hits and one earned run in six innings versus Winthrop last Saturday. Anthony Vasquez is another arm who could get one of the two starts up for grabs this weekend. Vasquez was expected to be a solid arm at the back end of the rotation for the Trojans, but he has really struggled this year to the tune of a 0-2 record, 4.98 ERA and .315 opponent's batting average. What has thrown the USC rotation into a state of flux is not just the mediocrity of Couture and struggles of Vasquez, but the surprising form of redhsirt freshman Andrew Triggs. Triggs was expected to do nothing more than compete for innings out of the bullpen this year, but he starred out of the 'pen early on and got a start last weekend when they played a four game series. In that start Triggs allowed two runs, one earned, in seven innings to lower his ERA to 2.16 on the year and force Kreuter to consider him for a rotation spot.

To say USC has struggled at the plate this year would be an understatement. The Trojans are batting only .253 on the year and are averaging only 12 total bases a game. One of the biggest reasons for the impotency of their offense is the disappointing beginning of the year for their shortstop Grant Green. Green was pegged by many to be the National Player of the Year and came into the year as the consensus #2 overall pick in this June's MLB Draft, but so far he's batting only .298 with one homer and five RBI. Green's numbers were even poorer prior to last week, but he had a strong week and could be ready to live up to his massive potential to the Bruins better be on alert. One of USC's top hitters is Hector Rabago who is batting .340 for the Trojans, but he went only 2-16 versus the Bruins in 2008. Another guy to keep an eye on is Robert Stock who is batting .288 with a team leading three homers and 13 RBI.

UCLA's offense came alive last weekend in Greenville when they tagged the Pirates for ten, eight and five runs in there three games there. The offense was led by Pac 10 Player of the Week Cody Decker who had three homers and ten RBI on the weekend. Casey Haerther continues his outstanding performance at the plate for UCLA with a .371 batting average despite being pitched around most of the year. Haerther's performance has been expected though. The performance at the plate of diminutive second baseman Eddie Murray was far from expected though. Murray is leading the team with a .400 batting average and has shown surprising power with two homers, a triple and seven RBI which has given him a team leading .700 slugging percentage. Not only has Murray hit the ball well, but he's been patient and used his speed to draw walks and force errors, giving him a .552 on-base percentage. If the Bruins want to rack up enough conference wins to make the postseason though, they'll need to catch the ball. Yet again poor defense came back to hurt the Bruins last weekend as they lost the series finale 7-5 with five of those seven runs unearned. The defense all around the field needs to get better because UCLA has enough of an uphill climb to be shooting themselves in the foot.

The game times this weekend are 2 pm PDT on Saturday and Sunday and 6 pm PDT on Monday. The games will be played at USC's Dedeaux Field where the Bruins haven't lost in two years. Dedeaux Field is on the campus of USC near the intersection of Jefferson and Vermont. Tickets for the games are $8 and parking is $3 if you let the attendant know you are there for the baseball game. If you can't make it to the game, you can listen live or follow along on Gametracker via the official site.