DC, JS, PAA - Thanks for Everything

Share All sharing options for: DC, JS, PAA - Thanks for Everything

And so we close the book on 3 straight Final Fours as the Bruins lose to Villanova in the second round 89-69 (box score). It is a shame that our three seniors that have given their all for UCLA have to go out like this so far from home in front of a hostile crowd, but the NCAA Tournament can be cruel in that way. Shipp had 18, DC 15, and Aboya 9 and 8 in their final games as Bruins. Thanks for everything guys. We will miss you.

Bilas and Enberg said a little about this near the end of our game, but CBH made it a point to recruit winners and we're seeing off the last of that first group of winners. In some ways there is nothing surprising here - 3s beat 6s, especially when the 3 is playing at home, but it doesn't make it any less disappointing that the Bruins will no longer be a part of March Madness.

All year long we struggled to defend the way that CBH teams of the past have defended, and this proved to be our undoing here, which is again not a particularly surprising conclusion. 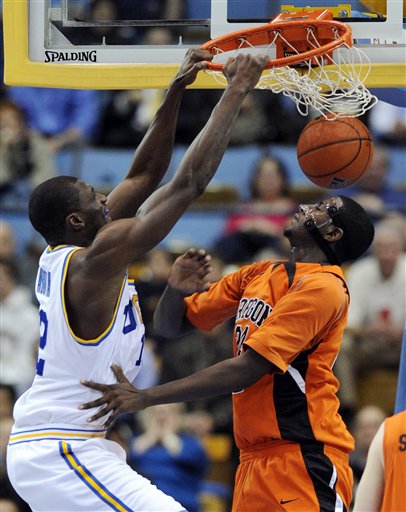 Congratulations are in order to Villanova, who came out and played with fire and intensity. They had a great afternoon shooting from the outside, and in the end, that's just too many fires to put out with all their interchangable guards (I still don't know any of their names), especially for a defense that struggles to recover from traps and double teams. I know there's a tendency for us as fans to try and internalize these problems, but I think that's the wrong mentality. Villanova was the better team and that's where it starts and ends. Hats off to them. 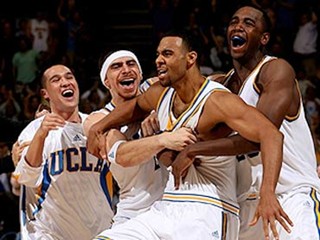 In retrospect, yes, this was a rebuilding year. It's not something we wanted to acknowledge during the season and making a run at the Pac 10 Title again, but it's true. We always hoped we could patch up our problems and maybe piece together a run, but the holes left by the 4th, 5th, and 37th overall picks in the NBA draft (all of whom start for their respective teams in the NBA) in the end proved too large to fill. 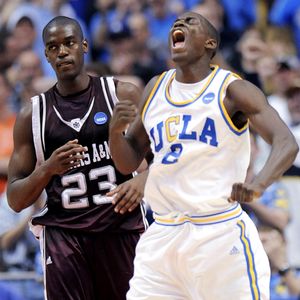 We will be back, and hopefully we will be bringing Jrue with us. I know that the draft is tempting, but Russell Westbrook never got the chance to hone his PG skills in college and he was fortunate to be drafted by a team that was willing (and has no other choice really) to live with his turnovers from that position. In the NBA, the point is not necessarily to be drafted high. The point is to stick around in the league, past your first contract, which generally doesn't happen on the bench. Not all players are so lucky. If he comes back, he runs the show. Period. We obviously have high hopes for our other freshmen: Anderson, Lee, Gordon, and Bobo. Remember: the best thing about freshmen is that they become sophomores.

Roll will return, another gutty veteran who has given his all. Keefe will be back, and will hopefully flip the switch the way Aboya did this year. Dragovic made some great strides in his defense from last year and will be back (hopefully). He may have been the weak link in the starting 5 which earns him some comments, but we have to remember how he started out on that end of the floor. I hope he continues his improvement at that rate over the summer. And of course we welcome a whole new group of freshmen: Anthony Stover, Mike Moser, Tyler Honeycutt, Brendan Lane, and Reeves Nelson. They will be freshmen too, and I hope we remember to be patient with them the way we were (mostly) patient with this year's group.

Rebuilding is a process, and while the depletion of our roster to the NBA was exposed many times this season, the cavalry is coming. Next year, the "Baby Bruins" moniker will return, and I'm already stoked.

So we go with the same painful refrain that 63 fanbases and teams will hang onto when this is all over: Wait till next year (or till Spring Football)