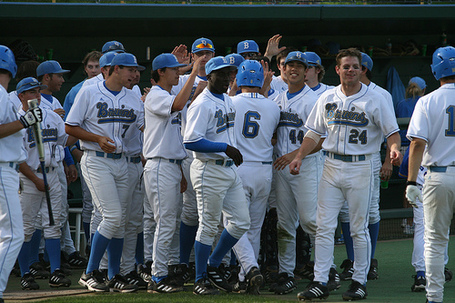 With basketball season coming to an end and Pac 10 play in full swing I'm going to begin upping the number of my baseball posts. I'll continue with my Friday series previews, but I'll begin providing game recaps within a couple hours of the completion of each game. If you'd like to follow along on a day to day basis with game updates, pitching probables and random observations you can follow my UCLA baseball twitter. Also, if anybody knows where I can find pictures from this season it would be much appreciated. The son of the man who used to take all of the pictures I used graduated last season.

It was two beatings separated by an outstanding pitching performance. Those two beatings came courtesy of UCLA who knocked the Trojans around in the first and last game of the series and the outstanding pitching performance thrown by an unexpected USC hurler. The Bruins took two of three from USC on the weekend and have now won nine of their last 12 at USC's Dedeaux Field. The series win also marked UCLA's third and in the last four years over USC with the two teams splitting their four games last year. Most importantly though, this series win was UCLA's second consecutive series win as they've begun to build some momentum at the end of an arduous string of road games.

Let's take a look back at this stretch of road games for the Bruins. UCLA did play midweek home games in the past four weeks, but each of the weekend series were on the road and against very, very good teams. First, UCLA traveled to Houston for the Houston College Classic where they lost all three games to #4 Rice, #8 Baylor and #10 UC Irvine. The Bruins spent their next weekend in Norman, Oklahima where they lost three to the #12 Sooners. The following weekend could prove to be the breakthrough for the Bruins as they battled back from a five run deficit in the series opener at #23 East Carolina and won two of three in Greenville. UCLA finished off their four consecutive road series by heading to USC as they opened Pac 10 play with a series win over the Trojans. So what was once an unfamothably horrific road swing isn't so bad anymore. Yes, it's not quite what UCLA was looking for, but they have some momentum as they look to win the Pac 10 and aren't in too bad of a position. One Pac 10 series down and not only was it a series win, but a road one at that.

To accomodate for UCLA's finals, which took place last week, the series between UCLA and USC was played on Saturday, Sunday and Monday. Saturday's game had a lot of intriguing storylines. It was the beginning of Pac 10 play for an underachieving UCLA team and a USC team whose head coach Chad Kreuter is definitely on the hot seat. It was the first game of a series between UCLA and USC which is always one of the best of the season for the intensity alone. Also, freshman sensation Gerrit Cole was moved to the top of the Bruin rotation and would be shouldering the load in a series opener. Cole got some help before he ever toed the rubber when two hits and an error let the Bruins put two on the board in the top of the first. The Trojans got one of those back in the bottom of the first, but the Bruins answered with one more of their own in the top of the second on a Blair Dunlap squeeze bunt. USC wasn't going to let the Bruins get away, at least not yet, and got a leadoff homer in their half of the second to make it 3-2 Bruins after two inning. After the second inning, both Cole and USC starter Brad Boxberger settled in and began dealing. In the third, fourth and fifth inning neither team mustered more than one hit in a single inning. That all changed in the sixth though when the Bruins gave themselves a nice cushion. Two walks, a fly out and another walk loaded the bases for UCLA with out one out. Dunlap struck out and put the pressure on Eddie Murray who fell behind early in the count at 1-2. Murray battled back though and fouled off a few pitches in a long at-bat that resulted in a walk, bringing a run in. Casey Haerther came up next and hit a scorcher to third that went off of Hector Rabago's glove and bounced into left field. The error on the USC third baseman allowed two runs to score and after six UCLA led 6-2. In the bottom of the sixth, UCLA trotted out a new pitcher to relieve Cole and it was another freshman, Trevor Bauer. Bauer got into early trouble when an error and single put runners on first and second with no out, but he got a couple strikeout and a line out to put a zero on the board. It was an easy seventh and eighth for Bauer as he retired the Trojans in order and brought the UCLA batters to the plate in the ninth to finish off the Trojans. Haerther singled to lead off the inning and Cody Decker was hit by a pitch to put runners on first and second with one out. Alex Weber-Shaprio laced a single to center bringing home Decker. Then, with two outs Niko Gallego doubled to plate one making it 8-2. A hit by pitch loaded the bases and Dunlap singled bringing home one more. Murray walked to pick up his second bases load walk of the game, then Haerther cam to the plate one more time and put the nail in the coffin with a grand slam, making it 14-2. Bauer allowed two one, one earned in the ninth to finish the game, a 14-4 victory for the Bruins.

Andrew Triggs is a USC redshirt freshman who missed his senior year of high school with an injury and sat out his first year at USC. Before the season USC would have considered it a successful year for Triggs if he gave them some decent outings out of the bullpen, but the season isn't halfway through and he's already exceeded expectations. Triggs got the start on Sunday, his second of the year, and dominated the Bruins. He threw seven shutout innings and allowed only three hits. By the time he exited the game USC led 5-0 and were in control. Three of those runs game off of UCLA starter Rob Rasmussen who lasted only 3.2 innings before giving way to the UCLA bullpen. Jason Novak went 2.2 innings for the Bruins and allowed two runs before Brendan Lafferty finished the final 1.2 innings scoreless. The Bruins finally got a run off USC after Triggs' exit when Murray doubled, took third on a wild pitch and scored on a Haerther ground out. By the time the Bruins got on the board though USC was in control and on their way to a 5-1 victory.

The series was even at 6 pm Monday night as the Trojans in their alternate black uniforms took to the field and the Bruins in their alternate blue uniforms grabbed their bats. The two teams remained even until the third inning when Haerther hit a three run homer that is scheduled to land at Edwards Air Force Base Thursday night. Haerther's bomb didn't just clear the outfield fence in left-center field, but also cleared a 100 foot high fence there to protect those playing tennis behind it. The Bruins would tack on three more in the inning and went to the bottom of the third ahead 6-0. If six is good though, seven is better and that's the number UCLA put on the scoreboard in the fifth. Decker led off the inning with a single and Gabe Cohen singled with one out to put runners on the corners with one out. As the Bruins know all too well, errors only lead to big innings, but fortunately for them it was a Trojan error this time. A fly ball by Steve Rodriguez was dropped in center field, scoring Decker and making it 7-0. A single by Gallego scored Cohen and it was 8-0. Then with two outs, errors came back to bite USC again when a throwing error let Murray reach base and Gallego to score instead of end the inning. Haerther walked next to load the bases and Justin Uribe laced one to right that cleared the fence and make the score 13-0. UCLA added one more in the sixth and another in the seventh making it 15-0. Overshadowed by the UCLA offense, starting pitcher Charles Brewer was putting together yet another strong showing. The junior didn't allow a run through six innings before being pulled in the seventh, having gone 6.1 innings. Brewer allowed only two runs and six hits while striking out seven. UCLA tacked on two more runs in the ninth to make 17-2, but by then the game was in the bag. If anything important was to come from the ninth inning it would be yet another inning in the Gavin Brooks bullpen redemption story. The junior pitched the ninth inning and walked one while striking out the side.

Haerther's weekend was good enough to win him Pac 10 Player of the Week honors. The junior was 7-14 on the weekend with two homers, eight RBI and five runs. UCLA now sits at 7-13 on the season and 2-1 in conference play. In a piece of news that will surely put a smile on the Bruins' faces is that they will get to play a weekend series at home this weekend when Arizona visits Jackie Robinson Stadium. Before that though the Bruins will head up PCH to play #17 Pepperdine on Wednesday. UCLA lost to the Waves 5-4 on a 9th inning run at home earlier this year. Matt Bywater got the start in that game for the Waves and allowed three runs, two earned in four innings. He will get Wednesday's start as well, opposite UCLA's Bauer who will make his second start of the season. Bauer allowed one run in 1.1 innings of relief versus the Waves last time around.