Just how special this week is going to be in Howlandwood?

Look who is coming to town to celebrate the last week of PAA and two other Bruin seniors finishing out their last Pac-10 regular season in Westwood:

Aboya's parents - Baliaba Aboya Casimir and Kofane Angele - are scheduled to arrive in LosAngeles today after traveling from their native Cameroon, and will watch their son play for the first time Thursday against Oregon State.

More meaningful, though, is Aboya will be accompanied by his parents when he walks to center court in a pregame ceremony during the Bruins' Senior Day ceremony before Saturday's regular season finale against Oregon.

In addition to the Aboyas, on Saturday Bruins will also be honoring Coach Wooden's 1968-69 national championship team. For that occasion Bruin legend (who would have been a Ben Ball warrior if he was playing today) Sidney Wicks is coming to town. There is a great profile in the LA Times recounding Wicks and rest of his team-mates playing basketball under Wooden in a special time in our country's history:

"It was probably one of the most critical times in our country's history," the former UCLA basketball star says from his home outside Wilmington, N.C. "There was student unrest, black awareness, a cultural and sexual revolution."

And in Westwood, of course, there was UCLA basketball, a dynasty under John Wooden that thrived amid the chaos.

"We had to deal with all these things going on outside our house while still taking care of business as student-athletes," Wicks says. "It was a great time to be in L.A. and to be a Bruin.

"We were very successful."

Wicks, arguably the greatest power forward in UCLA history, helped the Bruins win three consecutive NCAA titles, Nos. 3, 4 and 5 in their record-breaking run of seven in a row.

A sidekick to Lew Alcindor as a sophomore in the 1968-69 season, the 6-foot-8 Wicks jumped to the forefront as the Bruins' leading scorer and rebounder in his junior and senior seasons, bridging the gap between Alcindor and Bill Walton and earning national player-of-the-year honors in 1971. In his three seasons, UCLA was 86-4.

"It was the best of times," says Wicks, who will be honored along with other members of the Bruins' 1969 championship team Saturday at Pauley Pavilion. "My experience there as a player, as a student, as a person . . . was unbelievable -- topped by being around the greatest coach in the history of athletics."

Well, in some ways history is repeating itself somewhat. Once again we are going through some interesting times (to say the least) and we get to escape from all of that by following UCLA hoops led by one of the best coaches in the country if not the best. It is fitting that the greatest powerforward in the history of UCLA basketball will be honored in the same day another legend will be playing his last game at Pauley.

Going back to the story on PAA's parents, they should be getting in town by Thursday night's game. Dohn has the details on their efforts to fly over to the US to check out their son in action for the first time in their lives:

It is Aboya's understanding people in the Yaounde, Cameroon, village where his family lives took a collection to purchase the plane tickets for his parents. They are scheduled to be here at least 10 days.


"It's incredibly special for him to have his parents visit him here and see his last two (home) games and the Pac-10 Tournament," UCLA coach Ben Howland said. "I don't think they realize how special it's going to be. I don't think they have any idea. It's a whole new world. They've never been here. So, it's a great thing."

Aboya said this trip will mark the first time his parents fly.

"They've never left the country. They've never been to an embassy to apply for a visa" Aboya said. "I had to explain to them how to do everything."

It's a relief that Thursday night's game is going to be on television (thanks to the powers that be to come to their senses). I am going to enjoy every min of PAA, JS, and DC playing in those home whites for the last time in Pauley.

Saturday is going to be a very special day with these guys walking on this court for the last time in their career: 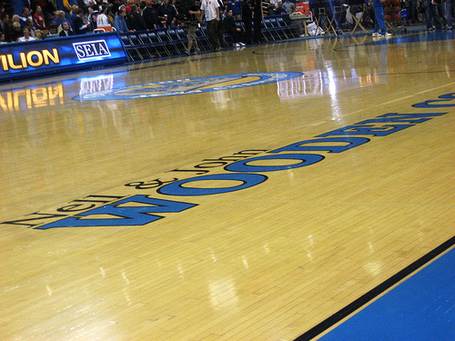 But I think the moment will start sinking in on Thursday night when we come to realization it will be the last time we see these guys in a Pac-10 home stand. I wonder while the Fox broadcasters go on and on about Oregon State's coach's connections to the President, they will bother talking about this (emphasis added):

Aboya's family situation has been chronicled. He almost left UCLA after three seasons (he already graduated with a bachelor's degree in political science) to pursue a professional career overseas to help ease his family's financial burden. His father has diabetes and his medication is very expensive.

However, Aboya didn't get the financial offer he wanted to play professionally, so he enrolled in graduate school at UCLA and came back for his fourth season as he works toward a master's degree, a future career in politics. His goal is to become Cameroon's president.

We are not going to see PAA diving for lose balls, gunning for every rebound or making clutch shots (like he has been doing this year) after this week in Pauley. At least for me memories will be rushing in what he and the other two guys have given us last four years.

It is funny. In today's college basketball landscape we often obsess (not here as much) about the talent we lose during NBA draft night or the so called one and done talent we might lose at the end of the season. Who we should never forget and appreciate every moment of are kids like PAA, DC, and JS who have given so much of their blood, sweat and tears, to bring UCLA basketball where we believe it all belongs. We haven't gotten there in terms of a banner (I know that's the standard at UCLA). Yet what they have done collectively for this program through personal sacrifices off and on the court (dealing with injuries, forgoing NBAs, tough family situations) have already made them legends of Post Wooden era in UCLA basketball.

Can't wait till Thursday night. Watching PAA, DC, and JS will more than make up for dealing with the annoying reminders (it was really cool the first time, ok the second time) from FSN broadcasters about Oregon State's connections to the U.S. government. We are just looking forward to seeing