No Coasting: Bruins Zero In To Crush Oregon State

Share All sharing options for: No Coasting: Bruins Zero In To Crush Oregon State

Now that's what we were talking about. Bruins start senior week by crushing Oregon State in a satisfying blowout win.

Earlier today I was dreading Bruins might be looking to coast to the Dance through this last week of the regular season. I was afraid that they would come out without focus and without the intensity that allowed them to gain momentum from big road wins last week.

No worries. Bruins did come out a sloppy in early mins as they found themselves tied 11-11 early in the first half and then they turned on the jets finishing the half with a 43-19 lead and never looking back. The final score was 79-54. Here is the box score.

The player of the game? No contest: 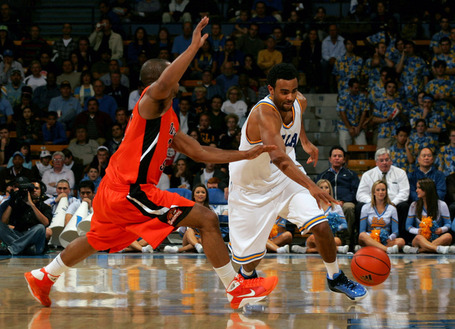 JS puts together perhaps one of the most spectacular first half performance (I think he had outscored the Beavers 22-19 at the half) in recent memory to finish the night with 27 points.

The others seniors weren't too shabby. DC almost notched a triple double with 6 points, 8 assists and 11 boards. PAA started off a little shaky picking up 2 quick fouls in the first half. No doubt he was probably a little jittery infront of his parents but he ended up having a typical PAA second half finishing the night with 9 pts and 3 boards.

All in all a great start for the seniors in this special week. We will have more on this game tomorrow and look ahead to Senior Day. For now I will leave it up to you for all the insta analysis, comments, reactions in our post game thread.