This fan post will mean something to the alumni who read this blog.

The Bombshelter is closing down.

You remember the Bombshelter, right?

It is the subterranean eatery located in the South Campus. (For you non-alumni, south campus is primarily where the science, math and engineering students congregate and north campus is where the humanities, economics, and English-major types hang outs. In short: North = cool kids, South = nerds. ... j/k .... sort of)

The Bombshelter was where generations of future engineers, mathematicians, doctors and scientists ate their burgers ... along with some poli sci majors who had to venture south to fulfill a GE requirement.

The popular campus burger joint known as the Bombshelter will see its bunker-thick concrete walls put to the ultimate test this winter: demolition.

A replacement South Campus Student Center (SCSC), planned for completion in March or April of 2011, will expand upon the Bombshelter's current location in the Court of Sciences, in front of the California Nanosystems Institute. The SCSC will provide four food stations and outdoor seating just like the Bombshelter, while adding indoor seating, an academic supplies store and, possibly, a coffee cart. It will also offer longer hours and green features like a walkable, landscaped roof, according to the Associated Students of UCLA (ASUCLA) and Capital Programs, which oversees major campus construction.

The new Student Center will be able to serve more people than the old one, while the addition of indoor seating and the rooftop terrace will create a more welcoming gathering place, said Cindy Bolton, ASUCLA's food service director.

"This new center will create a central spot for students and faculty in the South Campus," Bolton said. "The existing Bombshelter was built approximately 40 years ago, but it is currently very outdated, and we have limited capacity in what food we can produce and how many customers we can serve.

"Additionally, the South Campus lacks any cohesive study and social space, and the population in this area is expanding with the recent addition of several new buildings at the southern end of the Court of Sciences," Bolton added. "This project will inject new life into the Court of Sciences."

Here is the artist rendering: 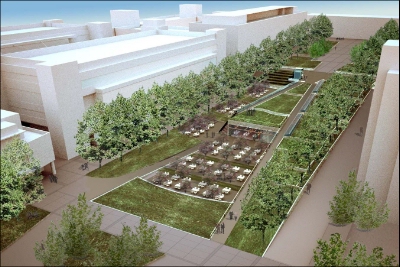