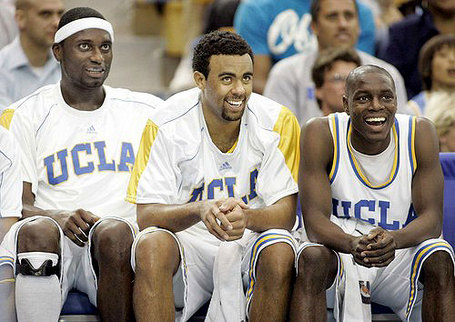 There are still a few games left, but our seniors played their last game in Pauley Pavilion leaving with smiles on their faces, a good win, and grateful fans. Josh Shipp followed up Thursday's career high with another career high 28 points. Darren Collison and Alfred Aboya had solid games, scoring 19 and 10 points, respectively. The trio have a few school records between them, reflective of their four and five year careers. From the LA Times:

No player has won more games as a Bruin than Aboya, who notched his 116th career victory. He also played in his 138th game, a school record he shares with Collison.

The game was a bit sloppy, with a lot of almost highlight-reel action. Lucky for the Oregon Ducks, who hung around during the first half, but still got blown out in the second. James Diefenbach, the fourth senior got into the game late and scored, much to the joy of his family. Last note, Dohn reports that the x-rays for DC's tailbone were negative; he'll be sore, but ready for the Pac-10 tournament.