Let's start this Monday by trying to put aside all the outpouring of senior day related emotion from Saturday. Ben Ball warriors ended their 2008-09 Pac-10 regular season on a hot streak winning 4 games in a row (5 out of last 6) setting themselves up in a good position heading into the Pac-10 tournament. While congratulations are in order for Washington Huskies for winning the Pac-10 title for the first time since the days of Ike as President, I am sure there are many Bruin fans out there thinking what would have happened if we had held on to an 11 point lead with about 8 mins to go against ASU at Pauley, or took care of business against WSU at home. Yet there is no use in doing the woulda-coulda-shoulda routine at this point. Instead let's lock into the present and think about how the Bruins can get off to a good start on Thursday night, setting themselves up for a good week at Staples.

For starters Bruins didn't get off to a good start against a defensively challenged Oregon team. While the final score was a blowout on Saturday, our first half defense was rather atrocious. As a team we only committed 1 first half foul (which is kind of a miracle given the SPTRs propensity to call fouls when a player breathes hard on his opponent). There wasn't a lot of defensive aggression and we were giving up a lot of wide open looks from the three points. Tracy Pierson from Bruin Report Online one of the key defensive culprits from Saturday (excerpt from free article at the time of posting):

As a team, the Bruins generally didn’t play really well, particularly on defense, allowing a pretty poor Oregon team to lead for most of the first half and hang with them for far too long. Oregon freshman Drew Wiley had a career night, hitting 6 threes and scoring 18 points on a slack UCLA defense. A friend texted me during the game and asked: "While the rest of the team is playing man-to-man, why is Nikola Dragovic playing zone?" Facetious, but, really, accurate. Time and time again Dragovic sagged of Wiley and allowed him to have a cup of coffee and catch and shoot. To make an excuse for Dragovic, he was spending a lot of time sagging off his man seemingly trying to help inside and prevent dribble penetration, but he was lazy and slow getting out to his shooter to close out. Wiley hit a couple of threes in the first half and Howland yanked Dragovic for James Keefe. Wiley went silent, then Dragovic came in for Keefe, and Wiley woke up again and hit two more threes.

Can't agree any more with that observation. ND has made tremendous strides in his game. Stat wise he had a decent game offensively yesterday. He also had three blocks including a spectacular rejection of Catron's dunk attempt. Still his defense was a huge liability and I think if were playing a more experienced team, it would have hurt us in a big way. While ND has made great strides this year and has made some key contributions on the offensive side, I don't think we will put ourselves in a position to make substatial impact this March, if we continue to get mediocre to poor defensive effort from the 4 spot.

Speaking of average, I though JH played another average game. He had some spectacular moments on fast breaks making some uncanny passes but still at times he appeared somewhat lost on defense and sloppy on the offensive side of the ball. Thought his comments to Dohn following the game were kind of revealing:

"I can't tell you if I'm leaving or staying," said the Campbell Hall of North Hollywood graduate. "I think I'll make my decision after March Madness. We're looking to make another run to the Final Four."

Those comments (at least to me) comes off as a kid who has already made up his mind re. where he is going to be next year. I just hop JH can live up to the hype of a "lottery pick" in however many games we have left.  Because to be frank from what we have seen on the court, I haven't seen the performance of a "Ben Ball warrior" who matched those of JF, AA, and RW (forget KL who was once in generational talent). He has had some good games with nice stat lines (he had 7 boards, 5 assists, 3 steals and 2 blocks on Sat) but he simply hasn't been able to display his "potential" on a consistent basis and establish himself as an impact player. Perhaps it was unfair for us to expect that but given the kind of "one and done" hype he came in with (which wasn't the case with JF, AA and RW) we all thought we'd see a little more from him. So it feels weird and different wrt to him as a "Ben Ball warrior" when we see him not so committed to coming back for a second year. I guess all of that will work out on its own. UCLA basketball will be allright with or without him. I am hoping he will be able to live up to at least some of his hype in big games before he is done in Westwood because to date he has not.

Anyway, the freshmen who I thought were most impressive yesterday were DG and JA. DG had a fantastic game IMO finishing the day with 6 points, 5 rebounds (4 offensive) and a block. What I thought was great about his game on Saturday was that he was staying with his man instead of going for the athletic option - block - every time out. He stayed right infront of his guy playing defense like a Ben Ball warrior. I can't wait to see this kid develop more under Coach Howland.

Also solid was JA who scored 4 points and dished out 5 assists in 14 solid mins (especially after DC went down). From Dohn in the Daily News:

"(Anderson) really made some good reads," UCLA coach Ben Howland said. "My favorite play was he drove and he jump-stopped and he gave the ball to Alfred (Aboya) for a lay-up. That was a great play, and you could see he's got the ability to be a special player down the road."

Anderson was averaging 7.4 minutes, 1.2 points and one assist per game in conference play.

However, since a five-turnover fiasco in seven minutes against Washington on Feb. 19, Anderson has nine assists and three turnovers in five games.

I have high hopes for the freshman core of JA-DG-ML and hopefully JMM. I think those guys will still go through growing pains next year (in a team that will be even more inexperienced in terms of game experience next year compared to this one) but together with next year's recruiting class, I think they have the potential to set up for a special season in 2010-11.

Anyway, coming back to present, about JS's career day:

Two days after scoring a career-high 27 points against Oregon State, the fifth-year senior bettered that by a point. He didn't score for the first 13minutes, 29 seconds, but his layup to pull UCLA within 32-30 ignited his day.

"Once I get a few going, I'm dangerous," said Shipp, who is averaging 19.9 points in the past eight games. "I can get it going in streaks. I stay patient. I take my time and I just wait and see what the defense gives me. I definitely don't try to force anything. That's when you start pressing and not playing good basketball."

His 3-pointer just before the halftime buzzer gave the Bruins a 47-40 lead, and he capped of another strong shooting performance (11 of 17) by making back-to-back 3-pointers to give the Bruins an 83-61 lead with 4:07 to play.

"He doesn't miss in practice," UCLA senior center Alfred Aboya said. "When he shoots the ball, there's no rebounding. You know the ball is going in. I think that is definitely something he has carried over to the game."

Hopefully JS can stay in rhythm rest of the way: 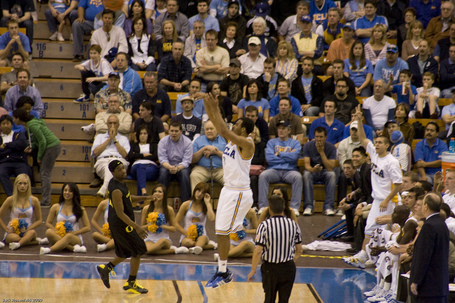 As for PAA he had a tough first half no doubt feeling the jitters infront of his parents. He missed a number of easy shots but finished the day strong as usual.

As for DC of course everyone was holding their breath when we saw this: 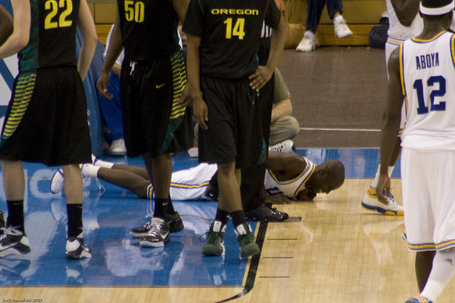 Thankfully though it sounds like he is going to be allright. From the Daily News:

The best news for UCLA is Collison appears to be OK. He was fouled and landed hard on the floor midway through the second half, bruising a tailbone that left it painful for him to sit for the final 12minutes, 13 seconds.

His Senior Day ended with him scoring 19 points, and with him getting X-rays at UCLA Medical Center on his tailbone. X-rays were negative, and while Collison acknowledged he will be sore today, he also is not expected to miss any practice time.

"It's nothing too serious, thankfully," Collison said. "It was a tough fall, but most important thing is we got the win and it's only day-to-day. I'm in pain, but not too much pain. The good thing is I didn't break anything."

And the LA Times:

"I'm going to be all right," he said, looking toward the start of the Pac-10 tournament at Staples Center in a few days. "I'm going to play Thursday."

What I loved about DC yesterday was that he was attacking the basket constantly. He was driving inside constantly. He scored his 19 points with attempting a three point shot. Hopefully he will be all right and be ready to play on Thursday with the same mindset.

What was encouraging about Saturday was how we rebounded. As mentioned above DG had a great game hauling in 5 rebounds in 4 mins. JK also had one of his best games of the year with 6 rebounds and 5 points. He was able to shut down Wiley when coming in for ND. As a team we outrebounded the Ducks 43 to 22 (IIRC Ducks outrebounded us in Eugene). Hopefully we can play with that kind of intensity in the rebounding department rest of the season.

Another point re. DC. Is it just me but it seems like the whole team feeds off him when he get fired up and shows emotion? The way he started Saturday's game all jacked up, it didn't just get his team-mates fired up, it seemed like he was firing up the whole Bruin Nation. It feels as if DC, JS, and PAA can sense the end coming near in next few weeks and they are now locked in and trying to give us something extra beyond what they have given us this season.

That takes me back to the point I made at the very beginning. There is no point in woulda-coulda-shoulda at this time of the year. The regular season was fun but we need to put that behind us and lock in on next game. If our Ben Ball warriors lock in and can take care of business one game at a time, things will take care of themselves. That's the beauty of March. We have lived through it last three years here on BN. Why change anything now?