In case you were wondering about Prince's shoulder you can stop worrying: 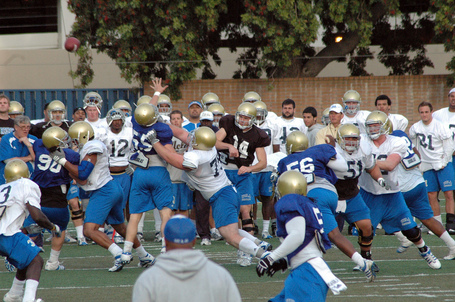 Kevin was back in practice yesterday and just as I was speculating it was a matter of him getting tired after getting back in to the routine of practicing with the first team after two years (since his high school). From the LA Times:

Two days after being shut down during the latter portion of practice, Prince was slinging balls around Spaulding Field on Thursday evening as he resumed his quest to become the Bruins' starting quarterback.

His performance was somewhat uneven. The redshirt freshman hit receiver Terrence Austin in stride with a long pass over the middle. Shortly thereafter, he had a short pass intercepted by cornerback Courtney Viney.

Prince said he felt no lingering soreness but acknowledged he was taking fewer repetitions and throwing fewer deep passes than usual.

"It felt fine," said Prince who received treatment the last two days but did not undergo any tests. "We were just making sure it's nothing serious."

In keeping with the baseball theme, Coach Rick Neuheisel said he would "kind of keep a pitch count" on Prince's shoulder to make sure the quarterback did not overextend himself. Prince said he expected to participate in Saturday's scrimmage.

"If it's feeling great, I'm sure they'll let me get as many reps as I can take," Prince said, adding, "For the most part, I want to show the coaches I have control of the offense and know what's going on."

BTW note that the LAT report was filed by Ben Bolch, who used to be the beat reporter for the Southern California basketball team. He was the one who once breathlessly reported about "gap closing" between Howland program and Floyd's mercenaries. So we will have to keep a very close eye on how Mr. Bolch is reporting about our program.

While Prince is getting used to the pace of getting starter reps for the first time in couple of years, Morrell Prince is having a pretty good game for someone who is not even a freshman (yet): 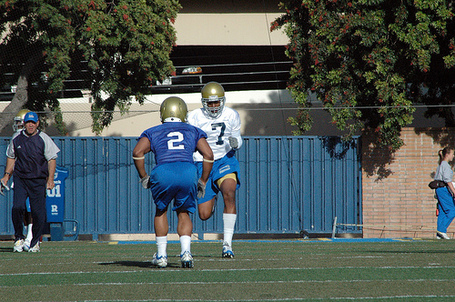 Pressley has been impressing his coaches last few days:

"He's got great athleticism," Neuheisel said. "He's got a million things to learn before he's going to be an accomplished player, but you can see the possibilities. It's his tenacity, his range and his explosiveness, so I'm excited about the possibilities.

"I would be disappointed if he weren't a huge part of what we do."

The 6-foot-4, 213-pound Pressley, who de-committed from USC and enrolled at UCLA in January, isn't the prototypical tight end, and that is fine with the Bruins.

And while he needs to get stronger and add weight to be a true tight end, the way offensive coordinator Norm Chow is moving Pressley around in practice, blocking won't be an issue.

Pressley is lining up in the backfield, and at wide receiver, in the slot and at tight end.

"They've got me moving so much, I'm a mobile tight end," Pressley said. "I'm more of a down-the-field tight end than a blocking tight end right now.

I wish I could comment more but I haven't seen the kid in person yet. By all accounts he sounds like a younger version of Marcedes. We haven't had an explosive threat like that in quite a while. As usual I think we have to keep reminding ourselves he is only a freshmen and it will take some time for him to learn all the blocking schemes which is going to be crucial for him to get totally integrated into our offense.

Speaking of blocking schemes, Coach Wayne Moses who is in charge of our RBs shared the following observations re. the logjam in our backfield:

And the blocking, according to Carter, is vital to getting on the field.

"Most of the time I was in (Monday) was basically on passes, for protection and stuff like that," Carter said. "That's way important. Coach Moses tells us all the time we've got to block first before we can run. If you ain't a good blocker, you can't get the ball."

Moses isn't concerned about getting enough snaps for all the running backs.

"Those guys have got to tell me," Moses said. "When it's all said and done, they'll be the ones who make the decision. I'm already seeing enough to get a feel for the way it's going to go."

UCLA needs to sort out the running back picture now because it will get even deeper in August, when freshmen Dalton Hilliard and Damien Thigpen enroll.

From what I have heard (and I admit my info. could be off on this one) getting the blocking techniques and schemes down will allow Dean to get more attention as well. Again, it's the kind of growing pain every young backs go through college. The trick for Dean, Knox and others will be to hang in there and keep fighting away in these practices.

Speaking of which practices start today tomorrow around 12:30 pm PST: 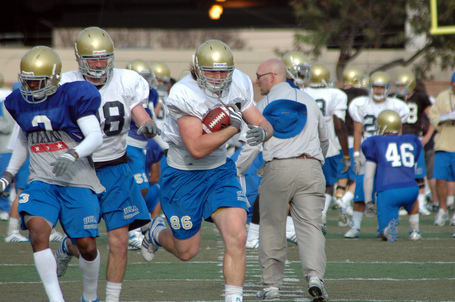 That's Logan barrelling down the field. I wouldn't miss the action if I were you. Get out there and come back here with your notes.