So the Bruins held their first scrimmage yesterday afternoon after practicing little more than week. While from the reports it sounds like they had a physical and competitive practice they were left with some uncertainty stemming from an injury to senior leader Logan Paulsen. From the LA Times:

Paulsen hobbled off the field with an injured right foot early in the scrimmage. Last year Paulsen suffered a broken right foot in the first game and missed the rest of the season.

X-rays taken Saturday were inconclusive, UCLA officials said. Paulsen, who was using crutches and wearing a protective boot on his foot, said, "Two doctors looked at the X-ray and they said there was shading there that could mean a fracture."

More tests will be scheduled if he continues to experience pain. "It's scary," Coach Rick Neuheisel said. "Hopefully we'll get some good news."

The 6-foot-5, 268-pound Paulsen, considered to have NFL potential, received a medical redshirt for the 2008 season and will be a fifth-year senior in the fall.

"Logan's injury put a damper on everything," offensive coordinator Norm Chow said. "He is such a leader for us."

Hopefully we will get some good news in next couple days.

Meanwhile, not too surprisingly the defense had the upper hand in yesterday's scrimmage: 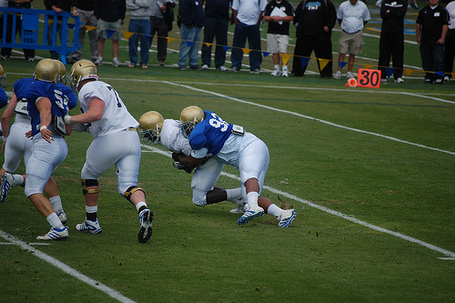 Yeah, Price and the gang were making life difficult for Bruin offense yesterday. From Painter's notes in the Daily News:

The defense was clicking in Saturday's scrimmage. Datone Jones had two of UCLA's six sacks and the Bruins offense scored only one touchdown. Running back Johnathan Franklin's score was the only time the Bruins were inside the 30-yard line.

"The first drive we were kind of pounded by the defense and we never really got back on track," quarterback Kevin Prince said.

The OC Register offered up the following impressions from CRN:

Neuheisel said the Bruins' offensive struggles went beyond the quarterbacks.

Speaking of offense Prince was disappointed that he didn't get to fire up the whole team:

"I felt I was in control of the offense, but I didn't think the offense was motivated," said Prince, who completed eight of 14 passes for 91 yards. "I didn't feel like we had enthusiasm after the first drive. That's on me to get the offense motivated."

While Brehaut was happy to hang in there:

"The first drive, we went down and scored," said Brehaut, who was six for 13 for 61 yards. "That's what we're here to do. I messed up a few calls, but I felt I played good. My huddle presence was nice and for the most part I made good reads."

As for Coach Chow, he is looking for more leadership out of his offense:

"Our problem is we're so young. We don't have that senior leadership we can rely on. We've got to find it."

Leadership is something Chow said he hopes to see more out of Prince, since the expectations are not as high for Brehaut.

"He's overwhelmed right now," Chow said of Brehaut. "We've given him so much stuff. We haven't slowed down. But he's hung in well."

And thinks Franklin might be the "no 1 running back" at this snap shot of time:

One offensive bright spot was running back Johnathan Franklin, who gained 45 yards on nine carries, including a 5-yard touchdown run.

"This was one of few opportunities to show the coaches what I have," Franklin said. "As far as putting it out there for the coaches to see, I think I did what I had to do."

Chow said Franklin needs to improve in terms of pass protection, but with Christian Ramirez still nursing a hamstring injury, he has put himself alongside Derrick Coleman atop the depth chart for now.

I am sure depth chart is going to be very fluid. One thing to keep in mind. It shouldn't be a surprise to anyone that at this stage with little more than a week of practice the defense is ahead of offense. That happens all the time. What is encouraging though is to hear that our offense is battling and our QBs, even a kid a like Brehaut are hanging in there. For full stats from yesterday's scrimmage check out the official site.

Let's keep our fingers crossed re. Paulsen. If we get some good news re. injury in next couple of days, I have to say seems like we have a pretty encouraging spring camp to date. Let's hope we can keep it going.