So following Saturday's scrimmage we have some shifting around up front stemming from Logan Paulsen's foot injury. We will get to the shifting below but let's first check in on Paulsen's status. He doesn't sound too worried (at least in public) in Dohn's Daily News report:

"Right now they're treating it like it is broken and they're just waiting - better safe than sorry type of thing, you know?" Paulsen said. "There's no surgery involved because the screw is fine. Instead of eight to 10 weeks, it'd probably be something like four to six."

As for how the injury happened apparently it's all about the shoe:

The adidas shoe Paulsen is wearing is also coming under scrutiny, since the prevailing thought at UCLA is the sole of his shoe is too narrow and facilitated the injury.

"I had a similar circumstance at Washington," Bruins coach Rick Neuheisel said. "I had Jerramy Stevens there, a tight end, who broke his fifth metatarsal, and the complaint was the shoes that they're wearing doesn't have enough sole for their foot because they're big guys. The little toe hangs over the edge when they make their cuts, and (the injury) almost always happens when they're cutting on it."

Paulsen is one of three UCLA players to break the fifth metatarsal in his foot in less than a year.

"I think I have the widest shoe they have here and then I have orthotics and stuff," Paulsen said. "It's just one of those things that happens, kind of a freak thing."

Well at least from the first reports it sound somewhat encouraging. Hope Paulsen get healed up soon and UCLA/Adidas can figure something about those shoes. BTW I don't think it's an Adidas thing because IIRC Washington wasn't in a K with Adidas when CRN was up there (my impression is that they have always been a NIke school but I could be wrong on that). Just in case you need a refresher here is how those shoes look when our guys are making a cut: 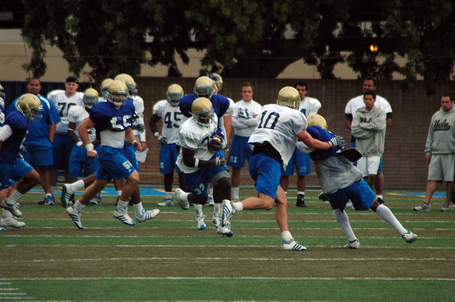 That's Derrick Coleman trying to rumble through with what appears to be Ketchum (#10) making a sweet block.

Anyway, so Paulsen is a protective boot and his injury has caused some shifting around. This means Nate Chandler once again has been moved from OL toTE. From the LA Times:

The injury left the Bruins short-handed at tight end in spring practice, resulting in the seemingly annual position switch for Nate Chandler, who was back at tight end Monday.

"We'll probably leave him at that position," said Coach Rick Neuheisel. "It's imperative we have some depth at tight end."

Paulsen missed all but one series of the 2008 season after breaking the same foot in the opener against Tennessee.

The only other healthy tight ends are freshman Morrell Presley and junior Jeff Miller, who was fourth on the depth chart when spring practice began. Ryan Moya is out after minor surgeries on his right knee and right ankle, but is expected to be ready for the season. Cory Harkey has been slowed by a hamstring injury this spring.

This is the fourth time Chandler has had a position switch between tight end and tackle. He worked during the off-season to get up to 280 pounds, but said he does not intend to "lose weight drastically" because of the switch.

"It's frustrating as a player, but I play on a team and I'm trying to help this team out the best I can," Chandler said.

Since the beat reporters can't help it (they are like Pavlov's dogs after all) they are trying to cast this as some kind of negative on the part of Chandler. However, I don't see it that way at all. I would speculate (and if anyone going to practices are seeing something otherwise please let us know) that Chow is going to be using Chandler as primarily a blocking TE (after all protecting the young QBs will be one of the primary focus of this offense next yeear) while using Pressley, Moya, Harkey and Miller as the H back.

So effectively I think Chow will end up using Chandler as the third tackle and call plays for him in the right situations. If anything it will contribute to Chandler's development as he will continue to work on his blocking techniques from his current position in the team. At least that's how I read this shift.

Speaking of blocking Palcic is shifting around OL looking for the best combination up front:

Sean Sheller moved to Chandler's right tackle spot. Jeff Baca moved from left guard to left tackle. Sonny Tevaga moved up to the first team at left guard, an upgrade based on his play in the scrimmage.

"I call him R.C. Tevaga -- roller coaster Tevaga," offensive line coach Bob Palcic said. "He'll play pretty good for a while, then he'll do something to break my heart."

Palcic, though, said Tevaga has lost "30-40 pounds" and was "moving around better and playing decently."

As to whether the arrival of highly regarded freshmen Xavier Su'a-Filo and Stanley Hasiak in August would help, Palcic said, "The players coming in are excellent, but let's be realistic that they are going to be 17-year-old freshmen."

R.C. Tevaga ... lol. I like that. Although I think that nickname will be applicable to the entire team given the inexperience at QB position next season. It's the key reason why coaches are spending so much time trying to get the right mix in place to protect the young guns and get the non existent running game going again.