Share All sharing options for: Spaulding Roundup: Practice Gets Sloppy/Chippy

After almost two weeks of spring ball the practice has gotten sloppy and little chippy. First here is the sloppy part:

The offensive coordinator put his unit through punitive post-practice exercises to drive home the point that they know the snap count on every play. Players were jumping before the snap throughout practice.

"It was guys who have been in the program," Neuheisel said. "So we get a little more concentration out of them, that's the message Norm is sending."

And here is the chippiness:

Afterward, Neuheisel said, "You have to remind them they can't lose their temper. That can cost us a game. . . . Obviously, they lost it and it got personal and resulted in a scuffle."

Still, Neuheisel said, "You like that they're passionate. You just have to channel it."

Hmm. I am actually not all that surprised by it. I'd be a little worried about our defense if our offensed looked in sync and in rhythm in every practice under a new quarterback, a still developing OL (which is waiting for more reinforcements) against a defense which has been operating based on the same foundation for more than three plus years. I expect offense to perform better next season, however, I don't expect the improvement to be dramatic. 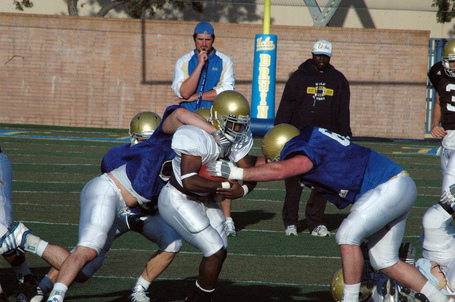 One complaint I have heard offline from some friends who went to UDub was that Neuheisel's team were kind of soft. I specifically heard how Huskies were not exactly going after each other in every practices and it showed on game days. I like the fact that I hear players going right at each other in practices and being intensely competitive. I think that bodes well for game days. If CRN and his coaches can get them to do it in a more disciplined way (so that we are not taking any stupid penalities during games) then we are going to be all right. As for now, it is all about incremental improvement through next season. From what I read it sounds like we are on track.

Speaking of our OL is still developing Sonny Tevaga is working hard to get in shape (and the right mindset):

"Coming into winter workouts, I didn't think I was going to be here," Tevaga said. "I truly, in my heart, thought that the coaching staff was really done with me. During winter break, I was thinking about what's next to do. But I got back after winter break and I was still on the team."

His mind-set was evident in the month after UCLA lost to USC on Dec. 6. Tevaga weighed 330 pounds on game day.

When he returned to school a month later, he weighed 365 pounds.

However, in the next two months Tevaga lost 40 pounds, showed a marked improvement in attitude and commitment, and now is playing better.

"I've still got that fat-boy mentality in me," Tevaga said. "I still get tired fast, but other than that I like my weight right now. They want me to be at 315. Moving-wise, laterally and getting to the second level (to block), hell, yes, I'm doing better."

Tevaga said his main focus after the spring will be strength, something he acknowledges must happen.

Hope Sonny doesn't let down the coaches again. While freshman (can we call him a freshman still?) Jeff Baca is proving to be a versatile option for Coach Palcic at both guard and tackle:

"I'm blessed," Baca said. "I can play both positions. I do what I got to do to help the team, whatever it is.

The Bruins have noticed, putting the sophomore at guard to begin spring before moving him back to tackle this week for the remainder of spring.

Baca knows that might be temporary, too, as offensive line coach Bob Palcic intimated Baca could move back to guard in the fall to make room for freshmen tackles Xavier Sua-Filo (6-5, 285) and Stanley Hasiak (6-6, 320).

"We have some tackles coming in who I think are very good," Palcic said. "I think they'll be pushing for a starting position."

Something Baca has already earned. Somewhere.

"I don't think I've found out yet (where I'm better)," Baca said. "He (Palcic) could tell me tomorrow I'm back at guard and I'd be fine with it."

These guys are going against a defense everyday which seems to have maintained the personailty and foundation it developed during Walker's tenure under new DC Chuck Bullough:

Bullough also negligibly altered UCLA's defensive formations, moving players a step or three, depending on the situation and the play call.

Other than that, two weeks into spring practice and Bullough's defense looks remarkably like his predecessor, which is exactly what coach Rick Neuheisel wanted when he elevated Bullough from linebackers coach to defensive coordinator when Walker was named New Mexico State's coach in the offseason.

"I don't see a whole lot of differences," Neuheisel said. "We're playing well, we're playing instinctively. There's no drop off in tenacity, and that's a comfort."

Not to mention a necessity.

Read the rest from Dohn's profile on Bullough here.

Bullough's defense and rest of the team are not practicing today. Hopefully they will use the rest to get rejuvenated and come back out tomorrow (at 4:00 pm) with a more focused and disciplined practice.