Bumped. Would love to read more reports like this from other practice goers on BN. GO BRUINS. -N

Apologies in advance...I'll have all this detail from day 1, but I have no clue when i expect to get back to Spaulding (likely a week or two) and I know that you can't really base too much on any one day, especially the first day.

That being said, time to crown the Prince! 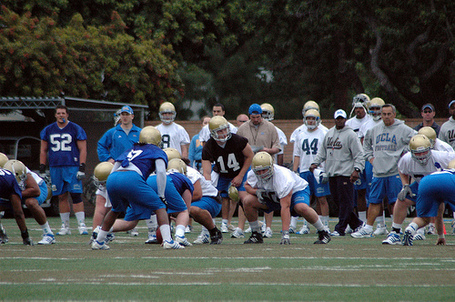 In both individual drills as well as the 7s and the light scrimmage, prince was the most consistent. If you watch all the small details of the QBs, his footwork, arm angle, and efficiency set him way apart from the others...that and he got almost 75% of the 7s and roughly 50% of the 11s, with Craft and Brehaut splitting everything else.

I mostly just watched the QBs during the individual drills. Like I said before, Prince's footwork looked to be effortless and concise. Brehaut, while having a strong arm, struggled a bit with his footwork. Craft looked like the same old Craft, throwing on target at times, and way behind receivers at others.  According to a friend of mine who was on the training staff last year, Crissman is still working through his shoulder surgery, which showed because his arm angle and delivery needs A LOT of work.  Rashaan stood off to the side and helped hand the ball to the center.  I feel for the guy.  In another system I think he could be really successful.

Anyhow, Prince looks the part. According to Dohn, Neuheisel said that both Prince and Brehaut did some good things and bad things, and he called a few of Prince's throws "horrendous." but all that to say, Prince's footwork and delivery and ultimately his knowledge of the playbook (which is no fault of RB that he hasn't learned it all yet...it was fairly evident) will likely make him our #1 qb next year. I say this all knowing well that you shouldnt read too much into one practice.

Brehaut 0-3 a little high and inaccurate

Crissman 0-2 both slant throws were way behind the receiver

Paulsen 3-33 nice catch for 20 yds on a seam, partially forced into coverage by Prince

This displayed a theme.  9 of the 11 catches went to backs or tight ends.  The QBs, especially Prince, wee mostly looking to check down to the closer receivers, ie. the backs and tight ends. this isn't something to be concerned about yet.  If anything, it was nice to see Prince take what the D gave him and not force any throws (although he did on a few and got away with them).

The fact that throws were being forced showed that our D looks similar to past years.  Stick close to the man and have good coverage, but we often don't look for the ball, or we would have more interceptions for sure.

A few things to note. There are no pads, so there is no tackling.  I'm fairly certain that our D was not going full strength, because the runners had a lot more room than usual. on the flip side, some of the holes were pretty big, and I wonder if that's due to the OL's assignment blocking, and the backs were doing a really good job finding the holes.  It will be interesting to see what happens once the pads come on! But we will take 23 carries for 102 yards any day.  That would be a great situation for our offense if we can get the running game on track!

Prince 8-11, 71 yds. 1 interception STRAIGHT to Viney, and one more that easily could have been picked by ATV

Craft 0-1, had 2 fumbled snaps on consecutive plays, and mostly just handed the ball off...

Brehaut 2-3, 18 yds. The one incompletion was a decent throw, but dropped by TE Miller.

Presley 3-21...was nicely moved around on the outside as a receiver, catching slip screens in the slot, and being a factor on play action! 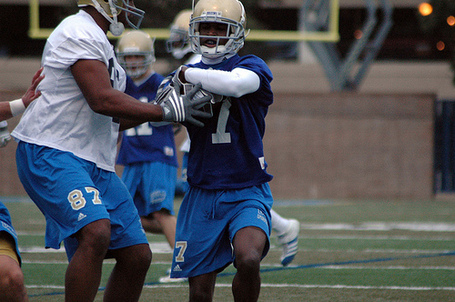 Paulsen 2-35...also did a nice job getting open on play action...TE will be in good shape when the season starts and Moya comes back!

Again, that's only 3 out of 10 being caught by receivers.  We'll see how this develops as time goes on.

That's all for the numbers. I thought in all, there was a high level of intensity (a few scrums breaking out here and there, mostly involving E.J. Woods) and a lot of good stuff that got done for the first day.

1) By my watch, Prince is already the guy...not based on the amount of reps (thats got a lot to do with RB not being fully comfortable with the playbook) but based on his footwork. he seiously looks more comfortable in the pocket, and did a great job completing the passes in both the 7s and the 11s

2)The strength training was noticeable...for one, Paulsen and Ayers definitely looked MUCH bigger, but both were moving well...

3) The holes that the RBs had! No one back looked better than another, and thats to be expected because there's so many guys...Franklin got the most carries, but it depends when they call a run, as Ramirez, Coleman, Dean, Carter, Knox, Franklin and Moline were ALL rotating at TB. but let's see if the holes are still there once the pads come on...

4) Coleman was already in at FB in a few situations, even one where he lined up at FB with Moline at TB...looks like we'll be seeing him there more often.

5) Antwon Moutra did some nice work and showed great hands in the individual drills, but once the D came in, he didn't look the same...let's hope he can step it up with game time speed!

6) Forcier was in there at WR, and obviously didn't know where to go or what to do, but based on the amount he was thrown in, i think the staff is excited to see what he can do at this spot.

7) Hester looks to be pretty athletic, although he did get beat by Rosario and then had to wrap him up for pass interference...let's hope he can

It was cold, but a good day to be out there at Spaulding. I know we should take day 1 with a grain of salt, but i hope to see the receivers more involved as the practices go on, and also to see how the battles at QB, RB, and CB shape up!

I hope to make it back tomorrow or Monday, but it's not looking very likely at all.  I hope we can look forward to some other reports of the other days!