Share All sharing options for: Spring's Second Scrimmage In Pictures

So the football team held it's second full scrimmage of spring football season on Friday afternoon. I posted a roundup on it over the weekend which you can read over here. Thought I start the Monday revisiting that scrimmage via amazing shots (as usual) taken by our friend E. Corpuz who has been supplying us shot after shots all season seemingly covering every UCLA sports.

Friday's big star was none other than Brian Price who was simply an animal all afternoon long. Here he is getting congratulated by Kyle Bosworth after another big play: 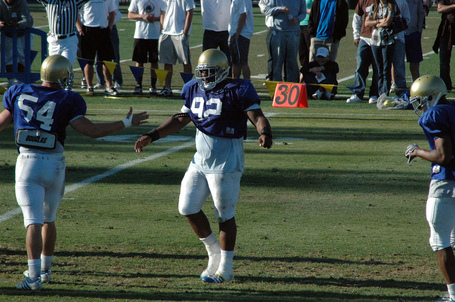 Brian (per the LA Times) finished the day with 4 sacks and 1 blocked FG pictured right here: 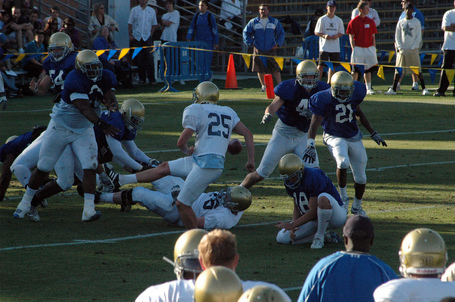 As far as the offense was concerned Kevin Prince as mentioned in the roundup is still going through a learning process: 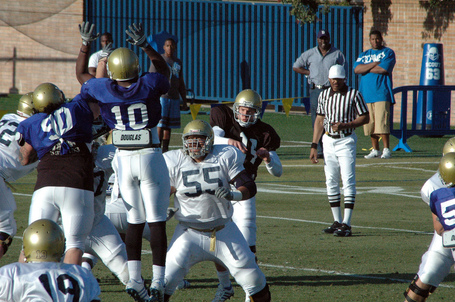 His stats weren't impressive finishing the day completing 5 passes out of 19 attempts for 55 yards (and 2 ints). However as tough of an afternoon Prince had, there were some bright spots in the offense as it was able to move the ball against a stoud D. More pictures after the flip.

It was our two young running backs - Knox and Dean - who probably had their best days out at Spaulding. Knox led all the backs rushing for 48 yards carries in 8 carries: 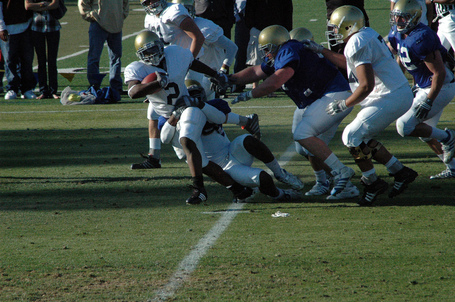 While Dean ran for 20 hard earned yards in 5 carries and also scored a TD: 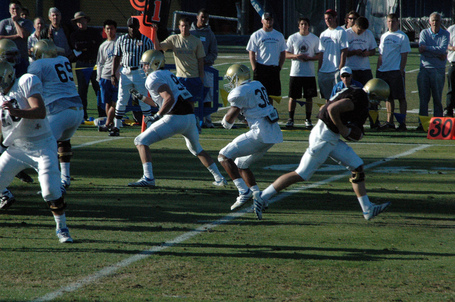 As for our others QBs, Brehaut stats wise seem to have a decent game: 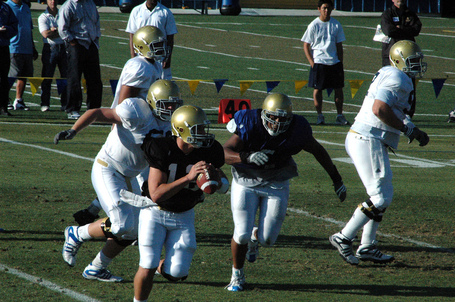 He completed 6 passes out of 8 attempts for 50 yards (presumably some of it came with the second team?). If any of you were out there would love to hear your impressions of him.

Going back to the defense besides Price there was another kid who had a monster scrimmage. Meet - number 26 - redshirt freshman Andrew Abbott: 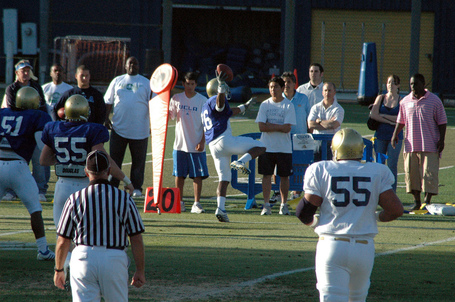 The walkon CB from Mater Dei is celebrating there after picking off Prince. He was responsible for both of Prince's interceptions on Friday. Apparently he has been having a pretty special spring.

Another name that stuck out to me from the stat sheet was none other than Chris Foricer who caught 2 passes for 16 yards and a TD: 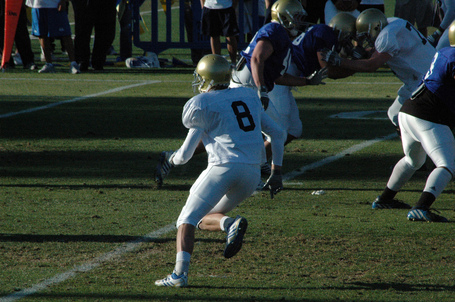 Nice to see Foricer hang in there even though his UCLA career hasn't gone the way he anticipated when he came to Westwood. Chris and rest of his team-mates come back out for more today at 4 pm EST: 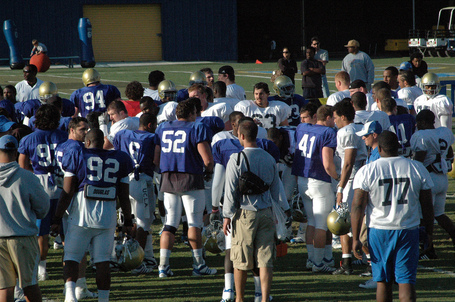 Thanks again to E. Corpuz for all the pictures in this post.

You can check out all the stats from Friday's scrimmage by going over here. This being the last week of spring football, we encourage all of you who haven't been able to make it out to Spaulding yet, to do so today. Sounds like it has been a lot of fun out there this spring.