Another day, another practice in which the defense dominated the offense out in Spaulding. The headlines today are pretty consistent in all the papers as Neuheisel directly called out the offense yesterday for its slopppy performance for the second straight day (following Friday's scrimmage). From the Daily News:

"I just think we need guys to step up," Neuheisel said. "They've got some of the best coaches in the land. It's time now to grow up. There are far too many just plain dropped balls out there, missed assignments, fumbled snaps. It's too lax.

"And the only way coaches know how to do it is to take it as their responsibility, which means we're going to coach their tails these last three days. We have to."

CRN wants the offense to match the intensity of his defense that has been bringing it to practice everyday:

Coach Rick Neuheisel would now like to see his offense learn something from his defense.

"They're really playing hard, playing well," Neuheisel said of the defense, "a great example for our offensive team. Our offensive team has got to take the onus now to match their intensity."

It sounds like the offense is trying to adjust without the presence of starting center Kai Maiava who went down on Friday:

The defense dominated in both scrimmages this spring, and the trend continued during Monday's practice.

One of the problems was with the center-quarterback exchange. Starting center Kai Maiava sprained his left ankle during Friday's scrimmage and is out for the rest of the spring, and the Bruins had several fumbled snaps between backup Jake Dean and a few of the quarterbacks.

Guess Dean and rest of the QBs will have rest of the week to get it all straightened before the final scrimmage at the Rose Bowl this Saturday. While Neuehisel played the bad cop, it was up to Chow to provide the encouraging notes:

[T]he sky was not so much falling as overcast in offensive coordinator Norm Chow's eyes. Asked if he felt the offense had progressed as far as he expected at this point, he said, "Yeah we have. We've done a great job."

As for the day's practice, he said, "Of the 11 guys we project to start, three practiced today. . . . Guys were jumping the snap counts; it's nothing to be concerned about. Let's just play."

As evidence, Chow said that the goal was to average four yards per carry rushing in Friday's scrimmage -- a significant achievement for a team that finished 116th in rushing offense in 2008.

Perhaps we can hear more from the folks who have been attending practices. But it sounds like our running game is showing some signs of life: 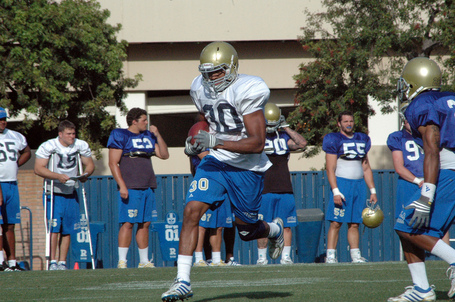 Dean has been running hard while Knox has been showing off this moves: 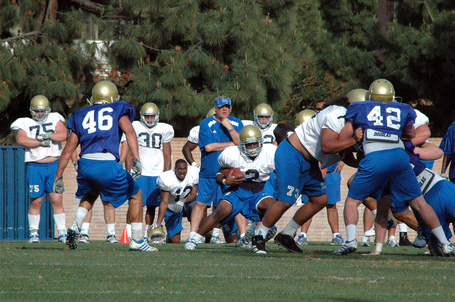 Coleman has been steady all spring: 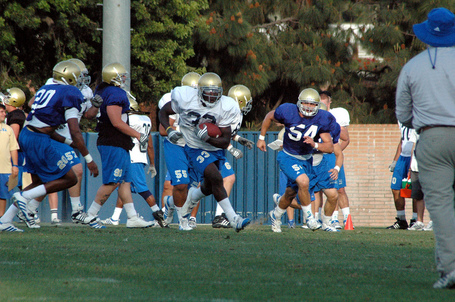 We can assume the offense will go through some more changes when Prince gets more comfortable as a starter and the OL gels more with the arrival of fresh talents this summer.

Meanwhile, hopefully in the immediate short term hopefully the offense will respond to the head coach's challenge and come back with more focus and intensity in the remaining practices. It is kind of amusing to see the yin and yang routine of Neuheisel and Chow. Their public statements give us a little hint of how the coaches mesh multiple approaches to motivating their players every day. I think the trick is not to get too hung up on these day to day updates (as much as we read everything) and wait for the data points to emerge in the coming years that will give us the big picture. Given all the experience these coaches have, I am confident they are thinking the same way too.