If you haven't had the chance to read matsumoto's practice report yet take a look here. Per his account Prince stood out among the three QBs yesterday. We will get to the coach's comments later but let's start with the news on Forcier returning to the team. Dohn has more details on Foricer's story:

[A]fter looking at several schools, including at Purdue and Ball State, Forcier elected to return to UCLA, for the time being, and participated in Thursday's spring practice opener as a receiver.

"I'm elated that Chris Forcier is at least going to give it a try at wide receiver," UCLA coach Rick Neuheisel said. "That's unselfish. He's a gifted athlete.

Forcier declined an interview request. He wore his familiar No. 8, but it was clear the position was unfamiliar. He dropped several passes, but he his speed was evident. Forcier ran a team-best 4.43 seconds in the 40-yard dash last month.

"He's a gifted guy in space," Neuheisel said. We just need to find ways to get him the ball."

That works for us. I just hope Chris doesn't get discouraged if things don't go well for him right away. Drew Bennett didn't become an NFL WR over night. He kept working at it. Chris certainly has the speed and athleticism to play the position. Hopefully he uses next couple of weeks to get the basics of his position down and put in a lot of work on his own. That way he would put himself (and his team) in the best position to contribute heading into Fall practice. If Chris develops into a decent option at WR, all on a sudden we will have a lot of speed at that position as we also have Randal Carroll coming in this Fall. Exciting stuff.

Hopefully Chris's decision will have an influence on Osaar Rasshan. Osaar also  has the athleticism to contribute to the team from a position other than QB but so far he has resisted any move to another spot in the team.

Going back to the QBs who are gunning for the starting spot here are CRN's comments on Prince:

Bruins Coach Rick Neuheisel judged quarterback Kevin Prince's first day by saying, "There were some throws he made that were indicative of what we think he's capable of. . . . There were also some throws that were horrific."

Here are Prince's thoughts on his first day:

"You can't think about the competition, how many reps Richard gets or how many plays I get," Prince said. "If you go out and make plays, you'll become the starter."

Prince's first day was a mixed bag, by his own assessment.

"Obviously not every play was a perfect decision on my part," Prince said. "I can think of a few off the top of my head."

But, he said, "I feel I had command of the huddle. I feel like I did decent job making decisions quickly. I feel mentally, I was there and knew what was going on."

And Brehaut's impression from first day of practice:

Neuheisel also praised Brehaut, who was indoctrinated into college football during a walk-through 40-minutes before the start of practice when offensive coordinator Norm Chow removed him from a drill for not knowing a play.

"It was a `Welcome to UCLA,' I guess," Brehaut said. "There were some plays I got a little mixed up, but for the most part I thought I handled all my checks right."

Brehaut is going to be all right: 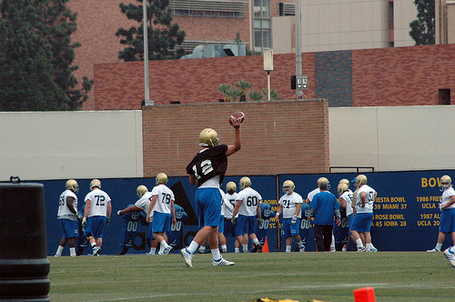 Speaking of all right, some potential good news with our key JC recruit from this year's class. Branden Warner who still hasn't signed a LOI because he is working out some transcript related issue, told Dohn he will enroll at UCLA in late June:

"I'm supposed to get the loan check soon, then I will pay the bill," Warner said. "I will be at UCLA in June."

Warner's arrival would help greatly. He was expected to compete for a starting spot as the Bruins look to replace Brigham Harwell. Warner says he is still being recruited by Washington State, LSU and New Mexico State, but he wants to attend UCLA.

Hopefully it all works out for Branden. We can definitely use him upfront next season.

Lastly, it looks like former UCLA coach John Embree is returning to the program. Although we don't know at what capacity. It should be interesting where he fits in. He obviously has experitse when it comes to coaching up TEs but remember he also coached defense, working with the ends in the first year of CRN's head coaching tenure at Colorado. Embree is of course the father of Taylor Embree, who by all accounts was one of our best freshmen last season. Either way it will be good to have him back in the program.