Spaulding Roundup: Competition Behind The Walls

Share All sharing options for: Spaulding Roundup: Competition Behind The Walls

It has only been couple of days but it looks like things are going to be a little different under Neuheisel this spring: 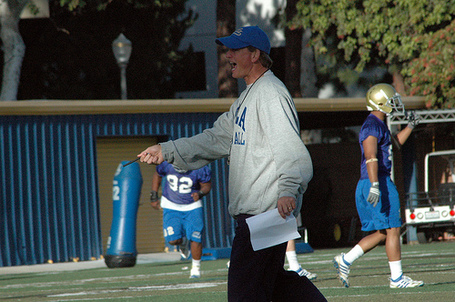 Reggie Carter and Logan Paulse are taking their cues from CRN establishing no "over the wall" nonsense this spring. Here is Reggie Carter in the DN this morning:

"We were 4-8 last year. We can't afford to miss a practice," Carter said Friday. "Some guys argue it's tradition. Well, tradition started when they were winning. … Coach Neuheisel talked to me, and I said, `You don't have to worry about it. We're not going to do it.' If some guys try to slide away and organize it and do it anyway, we'll just go back in the locker room, rally them up and get back out here and practice, and deal with them after practice."

When the Bruins did it last spring, the coaching staff was visible upset. Paulsen was one of the most upset about it, and has been a proponent of abolishing it this spring.

"My mentality regarding the wall is I enjoy coming out here (to practice)," Paulsen said. "Every one of these practices is special to me, and I don't want to be wasting an opportunity. I understand there's a lot of things that go into the wall, a lot of tradition, a lot of camaraderie and team building, but in my opinion these spring practices are too valuable to pass up on."

We will see what takes place in next couple of weeks but if these two kids hold the line taking their cue from Neuheisel, it will serve as yet another data point re. evidence of ongoing "culture change" in Westwood (no matter how much extremely cynical fans want to downplay it).

Meanwhile, on the practice field there is some intense competition going on particularly at the TB spot with six RBs - Ramirez, Dean, Knox, Coleman, Franklin, and Carter - all vying for substantial playing time. Coleman wants to build on the impression he made in his first season: 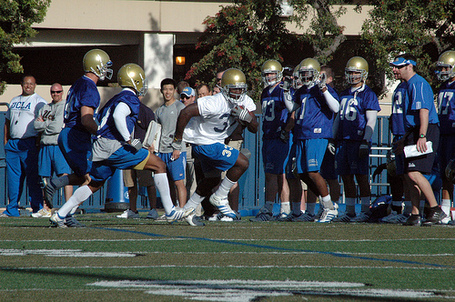 Carter is working on getting back to full form which made him a coveted a RB out of high school (before going down with injury): 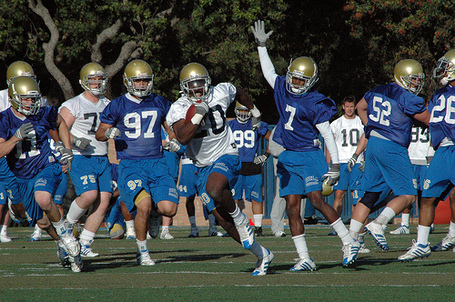 Franklin is trying to show off the speed living up to his nick name ("jet ski"): 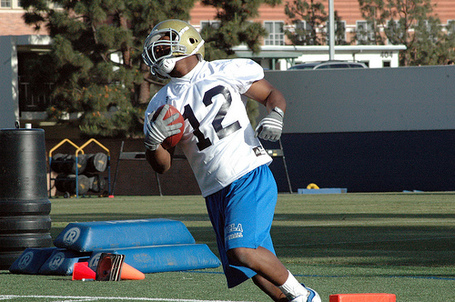 While Ramirez is battling for time after having to sit out for an entire season due to academic issues (no easy way out - cough*Senora Rosa*cough - in Westwood):

Ramirez, who gained 98 yards and scored one touchdown as a sophomore in 2007, was ticketed to be among the "happy" group a year ago.

But academic problems forced him to sit out last fall as a redshirt. That put him back with the pack.

"It's rough right now, because everyone is getting snaps," Ramirez said. "You kind of determine that on your own fate. You have to make the most of the time you get. [Thursday], it felt like I had five reps the entire day, but I felt like I made the most of what I did."

Here is Chow on how the sorting out for PT is going to play out:

"We talked about that this morning, that it's going to be hard to sort these guys out," offensive coordinator Norm Chow said. "If you try to be fair to them all, you're not being fair to anybody. It's only Day 2. When it gets midway through [spring practice], I'm sure we're going to have to knock it back."

The decisions may not be based entirely on what the coaches see.

"Sometimes you have to go on gut instinct," Neuheisel said. "No one said it was going to be all objective. Some of it will be subjective."

Well to find out what happens in Day 3, head out over to Spaulding and give us your own reports (and pictures).

Would love to hear your takes on how the competition is going ... behind the walls.